Manchester United are set to take on Brighton & Hove Albion away from home as they continue their race for a top-four spot.

Ole Gunnar Solskjaer‘s men dropped to sixth place but have a game in hand after Wolves won in their last fixture.

A win against Brighton is needed in order to get back to being level as well as to put pressure on Chelsea and Leicester City who would be two and three points away respectively.

Solskjaer’s men dropped points against Tottenham and in truth cannot afford to drop anymore given the form of the likes of the Blues and Wolves.

One would expect the legendary Norwegian to blow Brighton out of the water by selecting a full-strength side. 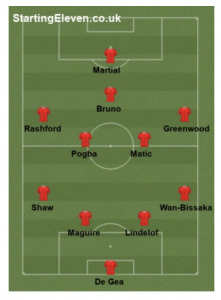 Bruno Fernandes could probably do with a rest but it would make sense to attempt to finish off Brighton early first then substitute him off the field.

Solskjaer tried to trust his back-up options to do the business vs Norwich and was horribly let down.

It’s now obvious he can mostly only rely on his starting XI and so trying to kill teams off as early as possible and then taking advantage of the five allowed substitutions is a better way of rotating.

Eric Bailly put in a good showing and is probably Harry Maguire‘s longer-term partner but has to be given time to regain his fitness.