Manchester United travel to Birmingham in the hopes of keeping their unbeaten run going but will first have to overcome the relegation candidates Aston Villa.

On paper, it’s a match Ole Gunnar Solskjaer and his men should win easily but the reverse fixture at Old Trafford didn’t prove that much.

Fans will be hoping the three points come around easily this time, particularly after Leicester City dropped points vs Arsenal on Tuesday night.

United’s unbeaten run has seen them come close to achieving their top-four goals but anything less than a win will threaten their chances.

Villa haven’t been anywhere near good since the resumption of the Premier League but need all three points themselves if they want to close the four-point gap on Watford who have a game in hand. 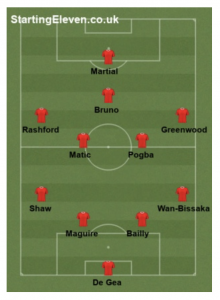 As the old saying goes- “if it ain’t broke, don’t fix it” very much applies here but unfortunately, there are question marks over Victor Lindelof‘s fitness.

The rest of the starting XI remains the same but Solskjaer did state the talented Swede may yet feature if he passes a late fitness test.

At this point, there may be concerns over the players’ fitness and whether they need rest or not but until it’s obvious on the field, there’s no reason to make changes.

The Red Devils last played on Saturday and so have had four days rest which should see them through Villa’s challenge.