Manchester United continue their assault on Champions League places with a home tie against Southampton tomorrow.

Ole Gunnar Solskjaer has no new injury problems and has hinted he will field the same side that has scored eight goals in the last two games.

‘There’s a squad of players champing at the bit to play and players who are in rhythm and who keep playing well,’ the boss said at the pre-match press conference.

‘There’s loads of decisions to be made but they make it easier by playing and performing well and looking after themselves, so if we don’t get too many injuries, there’s no reason to change too much when you’re doing well.’

Nonetheless, with a tricky away game at Crystal Palace on Thursday and the FA Cup semi-final against Chelsea just three days later, Solskjaer may choose to freshen up a little without disrupting things too much. Brandon Williams could replace Luke Shaw and either Fred or Scott McTominay may allow Nemanja Matic to take a break. The Scotsman is the more like-for-like replacement, so despite Fred‘s excellent form this season, we think Scott might get the nod.

The front five of Pogba, Fernandes, Rashford, Greenwood and Martial are buzzing at the moment and it’s unlikely that the manager will risk disrupting that rhythm, to use his words, although perhaps Dan James might have an outside chance of getting a start. 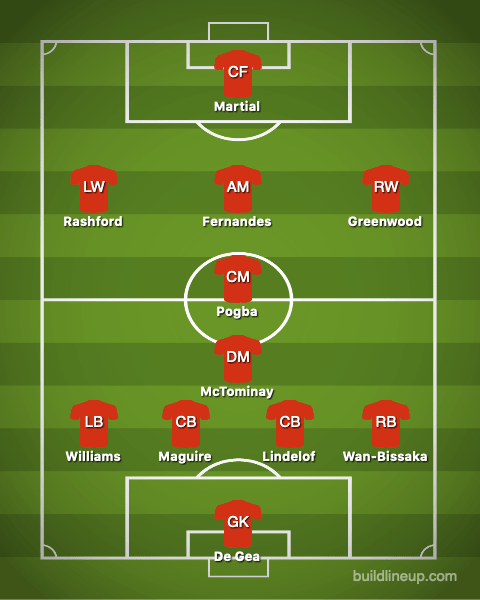 Rash is back! As United restart their season and do battle on three fronts, top scorer Marcus Rashford is fit and back to take his place in the side. But how much do you know about the United star? Take our quiz below to test yourself.