Home » Man United vs FC Copenhagen: Sergio Romero to be sacrificed in shake-up

Man United vs FC Copenhagen: Sergio Romero to be sacrificed in shake-up

Luke Shaw and Axel Tuanzebe are sidelined until September and although reports claim that Phil Jones is back training with the squad after knee surgery was postponed, he reportedly has not travelled to Cologne for the tournament.

Manager Ole Gunnar Solskjaer has not revealed whether Sergio Romero or David de Gea will play in goal.

‘I’m not going to say Sergio is the Europa League keeper,’ he said on the club’s official website, ManUtd.com.

‘It’s between him and David all the time. We’re going to pick a team that we think is going to win this tournament, so you’ll just have to wait and see.’

It is hard to predict what Solksjaer will do. Romero is usually always favoured in cup games but the boss picked De Gea ahead of him for the FA Cup semi-final against Chelsea. That, however, proved to be a disastrous decision as the Spaniard made a clear error for Chelsea’s second goal and was arguably also partly responsible for the other two.

Romero played in the Round of 16 tie against Lask on Wednesday and did well enough.

It is a decision between a steady keeper versus an erratic one who, whilst capable of making gaffes, can also pull out world class, match-winning saves.

We think Solskjaer will opt for the latter and give De Gea the gloves.

In terms of outfield players, Victor Lindelof was reportedly a concern for the Reds but has now been declared fit and ready for selection.

With no other competitions to focus on, there seems to be no reason why Solskjaer won’t pick his strongest side for the quarter final and so with that in mind, here is our predicted side: 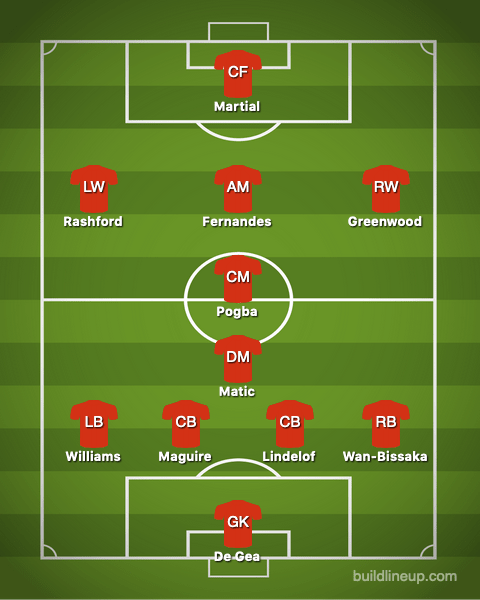