Whilst the English media pick over the bones of Manchester United’s defeat against Sevilla in the Europa League last night, calciomercato.com in Italy seems convinced as to who is to blame for the Red Devils’ demise: manager Ole Gunnar Solskjaer.

‘Solskjaer’s fault’ reads the headline in the popular journal, ‘Solskjaer the loser gifts the final to Sevilla’ the stark subtitle.

‘Ole Gunnar Solskjaer strikes again. The most inexperienced and poorest coach among those at the top of the English league is ousted from the third semifinal of the year,’ writes reporter and former coach Giancarlo Padovan. 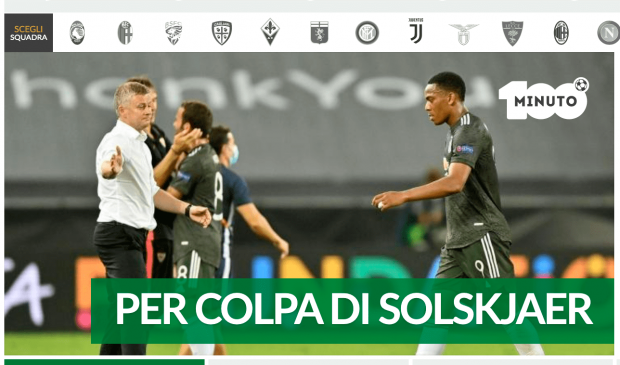 ‘I’m not sure if Lopetegui’s Sevilla deserved to win, but I know that with a manager like Solskjaer defeat will come sooner or later.

‘It’s not exactly a coincidence that he hasn’t won anything in his career, despite leading a team that when Mourinho was around was able to win everything.

‘By the way, the last trophies United won are the ones that the Portuguese manager gave them, three in the same season: the Europa League, League Cup and English Super Cup, a minor treble that, when it was won, was looked upon with derision, without giving it the right value.

‘Solskjaer, perhaps to demonstrate that he is a nonconformist, put in De Gea in place of Romero, the goalkeeper who had won the cup with Mourinho.

‘It would be wrong to write that the game was lost due to De Gea’s mistakes, given that, despite the two goals, he made no mistakes. But you certainly don’t have to be a scientist to understand that certain balances, once achieved, should not be altered.

‘Romero was the cup goalkeeper for Solskjaer and he should have remained so last night.’

Harsh words, perhaps, but there is certainly some truth to them. Solskjaer’s United can play exciting, breath-taking football at times, which along with his legendary exploits as a player buys the Norwegian a lot of loyalty among the fanbase.

However, the cold reality is that despite spending heavily on Harry Maguire, Aaron Wan Bissaka, Bruno Fernandes and Dan James, United’s points tally in the Premier League in 2019/20 was no better than that of the previous season – 66. In Mourinho’s last full season in charge, they amassed 81. What’s more, the side crashed out of three semi-finals to leave them trophyless for the third season in a row – the first time since 1988 that has happened.