The majority of Manchester United fans are certainly not pleased to see Marcos Rojo return to the club amid a crucial summer.

Ole Gunnar Solskjaer‘s success in leading his men to a third-place finish meant that this transfer window would be central to any plans of a title challenge.

Supporters were hoping the legendary Norwegian would be sufficiently backed in the summer in order for him to build on his good work.

Instead, United are yet to make a signing and are welcoming many of their loanees back such as Rojo.

The chaotic Argentine was originally sent out on loan due to being surplus to requirements but it seems he may have a place in Manchester with the fans below reacting to the picture he posted. 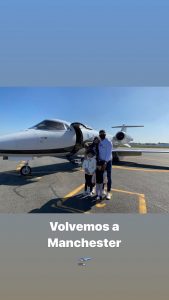 How has this day gotten worse pic.twitter.com/2zI9g9ZHE8

We can’t sign players, we can’t sell players, what can this board do? pic.twitter.com/AIeBzkQTP0

This guy is gonna injure either Pogba or Bruno in training ffs pic.twitter.com/V8wH6oOFBd

Rojo’s return doesn’t mean he will be a Manchester United player when the next season begins but fans are naturally traumatised.

Supporters have little to no faith in the board in the transfer market and so they know it’s not exactly impossible Solskjaer would be forced to keep the former Sporting man on board.

Hopefully, that isn’t the case and instead, Rojo is moved on swiftly with his wages freeing up some space for United to do more damage in the window.

Anthony Martial, Marcus Rashford and Mason Greenwood have scored over 60 goals between them in the past season. But how much do you know about other strikers who played for the Red Devils over the years? Take our quiz below to find out.