Manchester United fans will have to wait until a little later today to potentially see their new signing, Donny van de Beek, in action.

It’s understood United lost the match 1-0 but Van de Beek did travel with the squad having trained with them for a few days since his arrival.

The young Dutchman only arrived at Old Trafford after he completed his international duty and the lack of friendlies has meant supporters haven’t seen him in the club shirt just yet.

Van de Beek completed his transfer from Ajax for an estimated €40m, becoming Solskjaer’s first signing of the summer ahead of a crucial season. 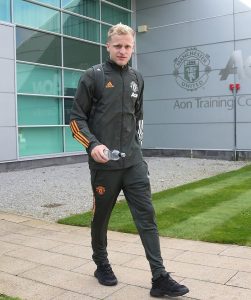 Fans are hoping Van de Beek’s arrival will spark more competition in the squad and overall raise the standards of what is needed to get into the starting XI.

The hope is also that he got much needed minutes under his belt as he won’t have a lot of time to adjust to his new surroundings and get used to Solskjaer’s tactics.

Manchester United take on Crystal Palace on the 19th of September and it will be interesting to see whether Van de Beek is thrown right into the starting line-up or not.