Manchester United finally kick off their 2020/21 campaign with a home game against Crystal Palace.

The big question is who, if anyone, will make way for new signing Donny van de Beek in the starting eleven and how it will affect the formation.

Solskjaer could go for a bold approach and simply replace defensive midfielder Nemanja Matic with the more attack-minded Van de Beek, but unless the Dutchman is asked to hold, this would leave United’s central defenders lacking crucial support.

It may be that the boss will drop Mason Greenwood back to the bench instead. Given Greenwood’s recent form, it would be a tough decision but Solskjaer may want to discipline the young star after his recent indiscretions while on England duty in Iceland.

He has also been careful not to overplay the still-developing Greenwood in the past so having him as a weapon from the bench could solve a number of issues.

Leaving Greenwood out would probably signal a change in formation. A diamond 4-4-2 looks the most likely option, with Marcus Rashford and Anthony Martial operating as twin strikers.

Solskjaer is likely to stick with David de Gea in goal, with Dean Henderson given an opportunity to stake his claim in Tuesday’s League Cup game against Luton.

Elsewhere we do not expect any changes, with Victor Lindelof and Harry Maguire continuing in central defence and Bruno Fernandes and Paul Pogba joining Van de Beek in midfield. 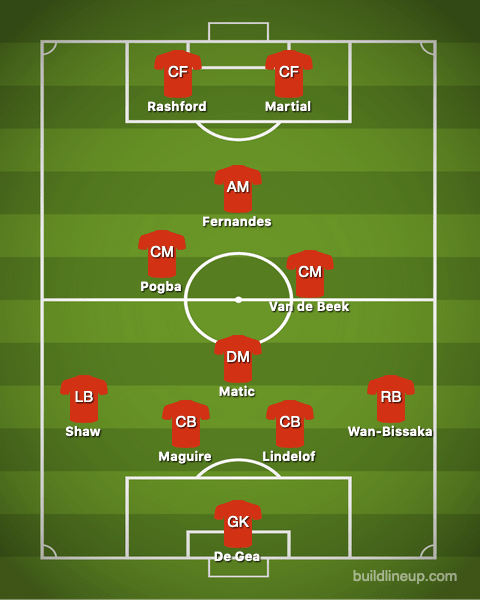