Manchester United’s board may have disappointed fans in failing to sign the likes of Jadon Sancho and Dayot Upamecano this summer, but few would accuse them of a lack of investment at the Under 18’s level.

In fact, the Red Devils have signed an entire team of the world’s most talented prospects in this one transfer window alone.

In goal, 16-year-old goalkeeper Radek Vitek completed a transfer from Czech club Sigma Olomouc in April and has already made his debut for the Under-18s.

Fernandez got off to a scoring start to his Under 18’s career at United on his debut against Burnley.

Another signing at left-back was 16-year-old Logan Pye from Sunderland, who has already played two games for Neil Ryan’s side.

Yesterday, the Reds captured the signature of 16-year-old centre back Willy Kambwala from French side Sochaux for a fee of around £3.6 million.

The 6′ 2″ youngster is seen as one of the top defenders in his age group in the world and has already captained France’s Under 17’s side.

Further up the pitch, attacking midfielder Isak Hansen-Aaroen joined from Norwegian side Tromso. Such was United’s interest in the playmaker that they agreed the deal when he was just 14 and have had to wait until his 16th birthday to complete the deal.
Hansen-Aaroen made his senior debut for Tromso aged just 15.
Two fantastic wingers were also added to the fold yesterday, Atalanta’s Amad Diallo Traoré and Peñarol’s Facundo Pellistri, both 18 years old. Diallo will not be able to join until January due to visa restrictions. United forked out an incredible £21 million plus add-ons of a further £20 million for the gifted Ivorian, who has the distinction of being the first player born in 2002 to score in Serie A.

Pellistri was signed yesterday for a fee in the region of £7.5 million and rumours suggest that he could be thrown straight into the first team squad as Ole Gunnar Solskjaer is in dire need of a right winger.

United have also acquired three of Europe’s most talented young strikers in this window. Joe Hugill has already hit the ground running since his arrival from Sunderland, having scored two goals in his first three games for the Under-18s.

The Reds have also re-captured prolific 17-year-old Charlie McNeil from neighbours Manchester City for £800,000, having allowed him to slip away from their academy when he was just 11 years of age.
And finally, United snapped up another hugely talented 16 year old, Alejandro Garnacho from Atletico Madrid, who will join up with Fernandez and Jurado to become United’s new ‘Three Amigos’. Garnacho can play on the left wing or up front.

Added to the likes of Shola Shoretire, Dillon Hoogewerf, Hannibal Mejbri, Charlie Wellens and Teden Mengi, United’s Under 18 lineup is now arguably the finest in the world. 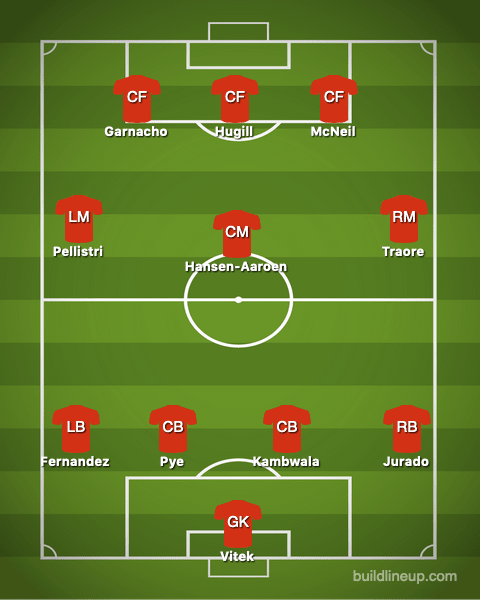