Manchester United fans have not enjoyed watching the team’s relatively poor start to the season with there already being calls for Ole Gunnar Solskjaer‘s head.

Pressure mounted significantly after the embarrassing 6-1 defeat to Tottenham Hotspur at Old Trafford.

United were down to 10 men but some of their defending was amateurish to say the least and their performance overall was disgusting.

The players didn’t seem to show up and failed to show any fight or sense of pride despite what was on the line.

It has only been three Premier League matches but the Red Devils were embarrassed by Crystal Palace on opening day and only just scraped past Brighton & Hove Albion. 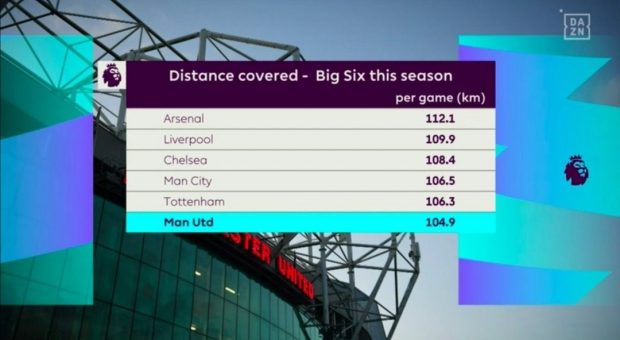 The three matches means the data hasn’t quite had time to settle and show the true differences but the fact Manchester United are already falling behind their rivals is cause for concern.

Fans have noticed immediately that there were fitness issues and much of that was put down to the lack of a proper pre-season.

Solskjaer himself made a promise that United should never be outworked by their opponents and at the moment he’s failing to keep that promise.

Fitness problems are frankly an issue that crops up far too often for a club of Manchester United’s size and cannot be used as an excuse over a long period of time.