Ole Gunnar Solskjaer should play this brave formation vs Newcastle

Ole Gunnar Solskjaer takes his beleaguered Manchester United side to St James Park to face Newcastle United tomorrow evening with selection headaches all over the pitch.

In defence, Solskjaer has admitted that captain Harry Maguire has taken a knock and may not play, which could be the best thing for the England man anyway after being sent off on international duty on Wednesday.

If Maguire doesn’t play, Solskjaer will probably stick with the Lindelof-Bailly combination at centre-back that is the only one to keep a clean sheet against Premier League opposition this season, in the 3-0 win against Brighton in the Carabao Cup. Axel Tuanzebe and Teden Mengi will also be available to step in.

At left back, Solskjaer hinted at today’s press conference that it will be too soon for Alex Telles to feature as there has been no time to integrate him into the squad.

‘Alex came in yesterday, did his recovery after a long, long flight from Sao Paulo after coming on twice for Brazil, so we’re looking forward to integrating him,’ were the boss’s exact words. Luke Shaw will probably keep his place at left back for at least one more game as a result.

Despite another mistake from David de Gea, this time being caught out of position for Sweden’s goal against Spain on Wednesday, Solskjaer will stick with him and Dean Henderson will have to wait for another cup game to stake his claim.

Further forward, Anthony Martial is suspended and Edinson Cavani is still in quarantine, so the big question is whether Solskjaer will pick his six best players and change the formation to suit, or whether he will stick with his tried and trusted 4-2-3-1 and bring in one of his second string instead.

We think he will finally plump for that 4-4-2 diamond that will accommodate Donny van de Beek alongside Paul Pogba and Bruno Fernandes, with Nemanja Matic holding behind the three.

If Solskjaer sticks with 4-2-3-1, then either Van de Beek will be asked to play out of position on the right wing or he will find himself on the bench again. If so, Dan James could be brought in on the left wing with Marcus Rashford playing through the middle, or Jesse Lingard, James or Juan Mata could be brought in on the right with Mason Greenwood starting at centre-forward.

A start for Odion Ighalo is another possibility, although we think that is unlikely.

Another interesting issue if Maguire is absent is who will be captain. This selection could indicate what Solskjaer’s intentions would be going forward if problems persist with Maguire. Bruno Fernandes is clearly the most natural leader but Solskjaer may prefer to favour seniority – in which case David de Gea might get the nod – or to keep the captaincy with an England player, which would likely mean Marcus Rashford.

With all that in mind, here is our predicted starting XI: 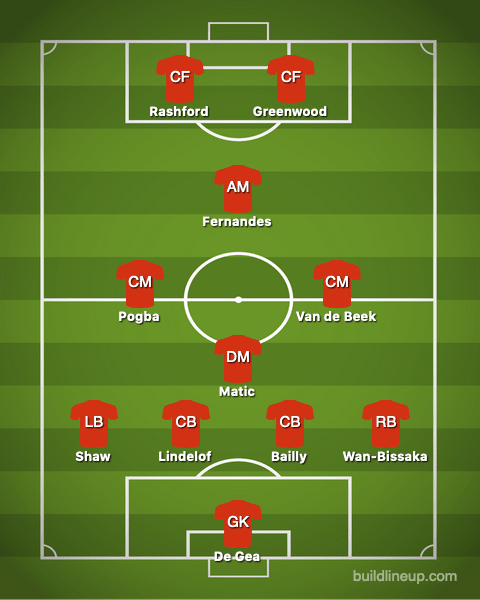 This summer’s transfer window was a strange and disappointing one. So cast your mind back to less stressful days and test your knowledge of past United arrivals and departures in our quiz below.