Ole Gunnar Solskjaer is hopeful that Manchester United have no new injury problems for tomorrow’s game against RB Leipzig.

Eric Bailly and Jesse Lingard are confirmed as unavailable and Anthony Martial is back in the squad as his suspension doesn’t apply to UEFA matches. Other than that, at this afternoon’s press conference Solskjaer said that there were ‘a couple of doubts and knocks as you’d expect, but I think we’ll be more or less the same squad.’

Leipzig go into the game with a number of injuries. They are set to be without Lukas Klostermann, Tyler Adams and Konrad Laimer, all with knee problems, and Amadou Haidara, who is in isolation following a positive COVID-19 test.

Predicting a Solskjaer line-up has been tricky lately and we do not know whether he will recall the likes of Paul Pogba, Mason Greenwood, Nemanja Matic, Donny van de Beek and Alex Telles in place of some of the side that drew with Chelsea at the weekend, nor whether he will use the 3-5-2 formation that worked so well against PSG or stick to his preferred 4-2-3-1.

The fact that it was Scott McTominay who joined Solskjaer for today’s presser could be a hint that the Scotsman will keep his place and it is likely that the manager will want to restore Anthony Martial up front as he is fresh due to his domestic suspension.

We think Solskjaer will want to take another look at Alex Telles in the left wing back role, which would suggest a 3-5-2 formation. Harry Maguire and Victor Lindelof‘s ‘plus one’ is between Luke Shaw and Axel Tuanzebe, who was fantastic against PSG. Shaw could get the nod, though, purely because he has played more games and has more experience.

Edinson Cavani is probably not yet match fit and is unlikely to start. As a result, we expect Marcus Rashford to start another game, up front alongside Martial, although Mason Greenwood could be given a chance if Rashford is rested for Sunday’s game against Arsenal.

With Bruno Fernandes always the first name on the team sheet and David de Gea seemingly getting the gloves in all but the Carabao Cup games, that just leaves the question of who partners McTominay in the defensive midfield role. This could again be Fred, although Solskjaer must be tempted to give Paul Pogba another start to try to inject some creativity into the midfield.

This leaves us with the same side that faced PSG, except with Harry Maguire returning to the defence: 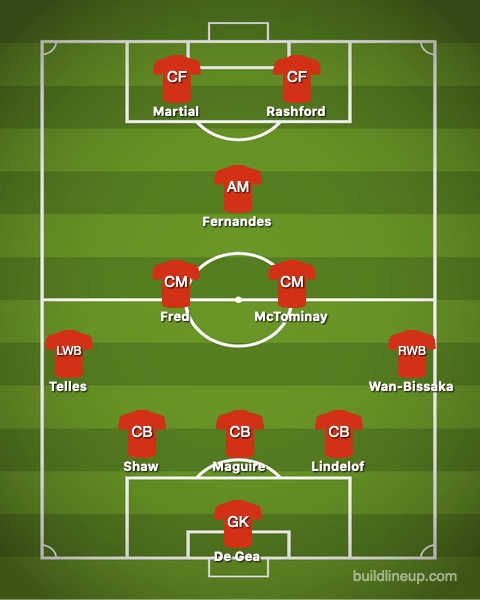