Figures published by The Athletic show how the Manchester United team has declined both offensively and defensively since Sir Alex Ferguson retired.

The legendary Scotsman left the club as Premier League champions at the end of the 2012/13 season and there have been four managers attempting to fill his boots since – David Moyes, Louis van Gaal, José Mourinho and Ole Gunnar Solskjaer.

At no time under any of those managers have any sort of figures shown that United have been as successful as they were under Sir Alex. 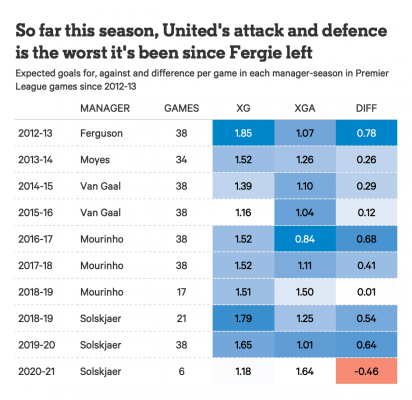 Under David Moyes this figure slumped dramatically to 0.26. Louis van Gaal improved that slightly in his first season, before allowing it to dip even further to 0.12 in his second.

José Mourinho’s first term in charge – 2016/17, saw the best figures since Sir Alex left of 0.68 – still some distance behind – but Mou’s stat dipped the following year and was almost zero in 2018/19 when he was dismissed.

It was at this point that Solskjaer joined the club and in that first half-season of 21 games, United came closest to matching Sir Alex’s 2012/13 XG of 1.85 goals per game, registering 1.79. However, defensively the XGA was the third worst post-Ferguson figure.

In Solskjaer’s first full season, he improved that defensive score considerably but the attacking score fell back. The season finished with a difference of 0.64 goals per game – the second best post-Ferguson result after Mourinho’s 2016/17 campaign.

This season has started off very badly and six games is way too few upon which to base a meaningful statistic. The 6-1 home defeat to Spurs is bound to skew the XGA figure, which indeed is looking by far the worst since the Ferguson era. But perhaps of more concern is the XG figure, which only stands at 1.18, the worst since Louis van Gaal’s dire second term when the side played some of the most turgid, possession-based football ever seen at Old Trafford.

In Solksjaer’s defence, we are comparing still young and improving forwards such as Marcus Rashford, Anthony Martial and Mason Greenwood to Ferguson’s Wayne Rooney, Robin van Persie and Javier Hernandez. But when you consider that Fergie’s forwards were being supplied by the likes of an aging Michael Carrick and Ryan Giggs, the likes of Tom Cleverly, Ashley Young, Antonio Valencia and Shinji Kagawa – even Phil Jones played nine games in midfield that season – the inability to even come close to that return after so much subsequent investment is disappointing, to say the least.

The fact that the 2012/13 side were scoring almost twice as many goals as this season’s team is therefore a huge question mark over Solskjaer’s leadership.

A lot has been made of the board’s pattern of supporting a manager with transfer funds in his first season (or when the side have failed to qualify for the Champions League), but then not subsequently. It is argued that it is a deliberate strategy to only invest sufficient to qualify for the Champions League, but not enough to win the Premier League, because the owners are only concerned about financial return, not football achievement.

However, these figures pose a different scenario: could it be that the board reduce their transfer investment when they observe a declining trend and realise that the incumbent manager is not one that they should continue to back?

The money spent on Harry Maguire and Aaron Wan-Bissaka to strengthen United’s defence in Solskjaer’s first window, for example, only brought the XGA to around the average of Mourinho’s first two seasons.

Whichever way you look at it, whether it is failing to back the manager in the transfer market or appointing the wrong managers in the first place, the buck still stops with the board and in particular, executive vice chairman Ed Woodward, who is undoubtedly one man who all fans will agree does not deserve to keep his job.