The manager will be without Luke Shaw, Phil Jones, Jesse Lingard, Eric Bailly and Marcos Rojo – although the latter two are back in training. Solskjaer is waiting to see whether Marcus Rashford and Victor Lindelof come through today’s training without any problems with their shoulder and back injuries.

Alex Telles looks set to make his Premier League debut to deputise for Shaw at left-back, while Axel Tuanzebe is the obvious choice to replace Lindelof in central defence.

Paul Pogba and Donny van de Beek both got game time for France and Holland, respectively, during the international break but it remains to be seen whether Solskjaer will include either in his starting lineup tomorrow, having recently preferred Scott McTominay, Fred and Bruno Fernandes in the central berths.

With both Rashford and Mason Greenwood having had time off, Solskjaer may settle for two up front rather than his preferred three, which would most likely mean switching to a 4-4-2 diamond formation again.

Telles’ presence makes this even more likely as he is excellent going forward and can provide extra width on the left.

That diamond could then see Pogba return to the starting line-up – or Van de Beek given a chance – without sacrificing McTominay or Fred. Whichever of Greenwood or Rashford is less fit could then operate as an impact sub if needed.

With all that in mind, here is our predicted line-up for tomorrow’s game: 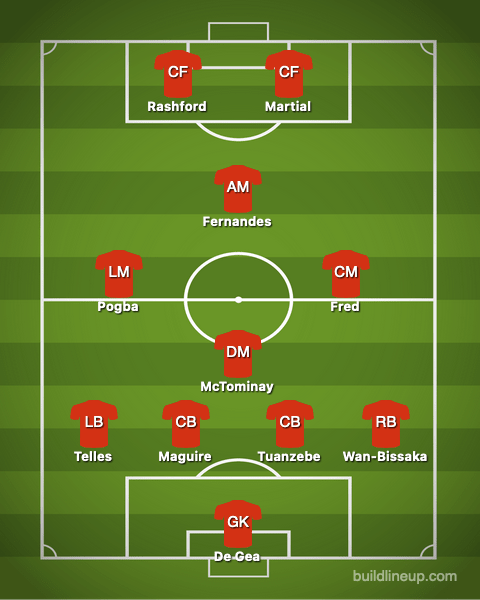