Alex Telles versus Luke Shaw: Who is the better full-back?

Recent signing Alex Telles looks set to make his Premier League debut at Old Trafford today as Manchester United face West Bromwich Albion, but how do his strengths and weaknesses match up to those of Luke Shaw and Brandon Williams?

The Athletic’s Carl Anka has taken the opportunity to provide a statistical comparison between the three left-backs and some interesting facts emerge. 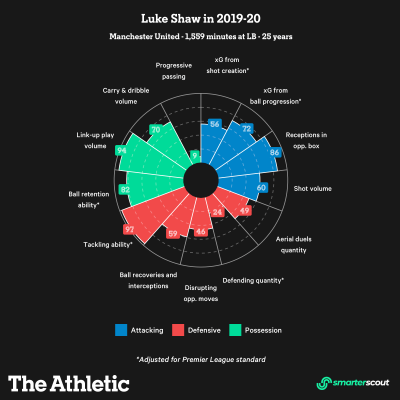 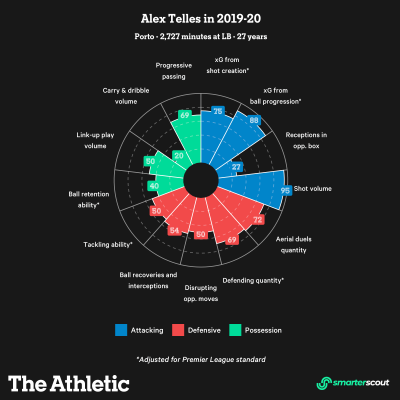 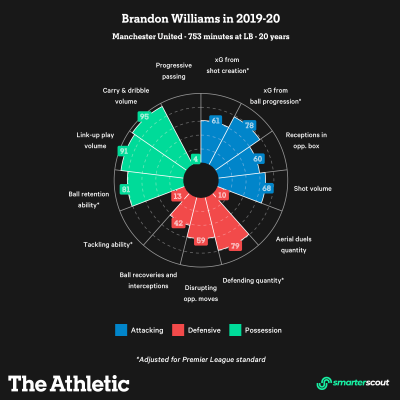 In terms of defensive qualities, figures for tackling ability, ball recoveries and interceptions, disrupting opposition moves, defending quality and aerial duels quality are used. Shaw scores considerably higher than the other two in terms of tackling ability with an impressive 97 out of 100. Telles registers 50 and Williams a surprisingly low 13%.

However, in terms of defending quality, Shaw ranks lowest of the three with 24%, with Telles on 69% and Williams the highest on 79%.

Telles comes out top on aerial duels, despite being a couple of inches shorter than Shaw, at 72% vs. 49%, with Williams struggling at 10%.

The overall figures for defensive traits rank Telles as best with 295 points, with Shaw on 275 and Williams on 203.

Possession figures included were ball-retention ability, link-up play volume, carry and dribble volume and progressive passing. In this department, Shaw and Williams score very similarly, with much higher results than Telles in all but the progressive passing category, where Shaw only scores 9% and Williams 4% versus Telles’ 69%.

Overall in possession stats, Williams comes out top on 267, Shaw is second on 255 and Telles scores a significantly lower 179.

Whilst at first glance the figures suggest that the Brazilian is not as good in possession as the other two, Anka claims that they reflect team styles (Telles’ figures were recorded while playing for his previous club, Porto.)

‘One should apply the context of the teams. Solskjaer’s United are especially left-flank focused, while Porto last season took a more evenly-balanced approach.,’ Anka explains.

‘Telles is a progressive passer… and his lesser build-up play at Porto was a result of his approach to ball retention; he would try to get the ball into the box where possible, but if the chance wasn’t on, he’d tend to pass backwards rather than to a midfielder who might work a better angle.’

Telles scores by far the highest in shot volume with an impressive 95%, compared to Shaw’s 60% and Williams’ 68%, but by contrast the Englishmen both received the ball far more frequently in the box, at 86% and 60% for Shaw and Williams, respectively, versus Telles’ 27%. This may, again, simply reflect differences in team playing styles and orders between United and Porto.

Overall scores on the attacking dimension put Telles slightly ahead on 285 versus Shaw’s 274 and Williams’ 269.

The sum of all three scores sees Shaw come out on top with 804, Telles second on 759, and Williams not far behind on 739.

Shaw comes out of the analysis as a good all-rounder. As Anka says, ‘Shaw is a good left-back. He’s not a title-winning one, and probably needs to do a little bit more to crossover into great full-back, but … Shaw offers a degree of balance and calm in a side often short of both.

He raises the talent floor of this United side, rather than their potential ceiling.’

Telles, on the other hand, offers much stronger attacking qualities, particularly from wide, and a far better goal contribution. His superiority in the air also means that defensively he can hold his own as well, despite the casual assumption among United fans that he is better offensively but worse defensively.

Shaw is basically a steady Eddie, whereas Telles is an explosive player. That kind of character is arguably exactly what is needed in this sometimes languid and quiet United side and should help Bruno Fernandes lift the aggression and passion quotient of the team.