United will want revenge over the Turkish side, who pulled off a shock 2-1 victory in Istanbul last time out in a game that will have shown Solskjaer that he cannot take them lightly.

On the other hand, the boss has spoken a lot recently about protecting tired players from injury so if he is to practice what he preaches, there will need to be some rotation for tomorrow’s game.

The fact that five substitutes are allowed in European matches will also encourage him to rest players as he will have more options from the bench if needed.

We expect Dean Henderson to be given another chance to shine in goal, having been selected for the reverse fixture.

In defence, Solskjaer could well rest Victor Lindelof, who has an ongoing back problem. Axel Tuanzebe is likely to deputise.

Marcus Rashford also has a niggling shoulder issue and has played in every single United game so far this season. The England man did look tired against West Brom at the weekend and surely will be rested for this one.

Anthony Martial has been experiencing a barren spell in front of goal and so may also be rested.

Edinson Cavani and Mason Greenwood could form an explosive combination to take their place.

A front two should in turn lead to a midfield diamond. Nemanja Matic was unimpressive against West Brom and will be replaced as the holding midfielder by Scott McTominay. Paul Pogba should get a start on the left of the diamond if he has recovered from a knock, as expected.

Resting Bruno Fernandes would be a brave call for Solskjaer given his importance to the side but we think Donny van de Beek will get his chance in the attacking midfield berth, with Bruno brought on at or soon after half-time if the match is delicately poised.

Fred has also played a lot of football of late but has fantastic fitness levels and could well take the right berth of the diamond.

With all that in mind, here is our predicted XI to face Basaksehir, with seven changes: 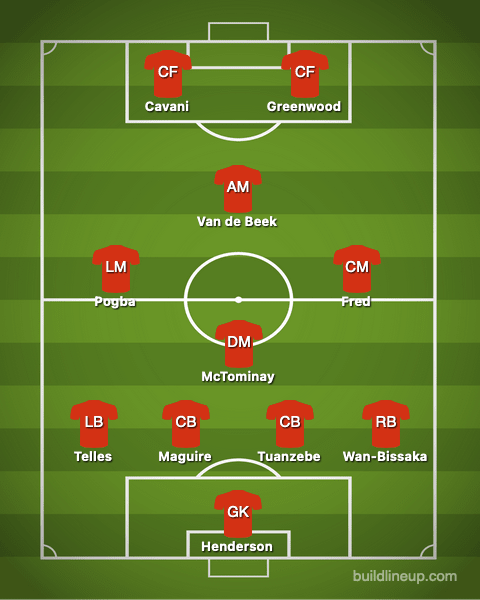