Home » Ole Gunnar Solskjaer to go for the jugular against PSG

Ole Gunnar Solskjaer to go for the jugular against PSG

Ole Gunnar Solskjaer has a strong squad available to him for tomorrow night’s Champions League clash against PSG at Old Trafford.

The boss said ‘the training group today was a massive one and everyone’s held their hand up today and made themselves available for selection,’ which suggests that only Axel Tuanzebe (suspension), Phil Jones and Luke Shaw will be unavailable.

Solskjaer also noted that ‘it’s special for [Edinson Cavani] to play against PSG’, hinting that the Uruguayan might get to start the game in the centre forward position.

Along with Cavani, Donny van de Beek has also put himself in a strong position to start after two fantastic recent performances.

United only need a point from the game but arguably they will be far better off staying on the front foot and attacking PSG rather than trying to defend against the likes of Mbappe and Neymar.

This could see Solskjaer ‘go for it’ and field an attacking side, perhaps a 4-2-3-1 formation with Van de Beek and Fred occupying the midfield berths.

This would be a gamble as it would place a lot of defensive responsibility on the pair, but it would take the game to PSG.

Mason Greenwood was hauled off at half-time on Sunday so could lose his place to the returning Anthony Martial.

The other, more conservative option is that both Greenwood and Martial will find themselves on the bench and the 4-4-2 diamond will be retained, with either Scott McTominay or Nemanja Matic sitting at the base of the diamond, Fred on the right and Van de Beek on the left.

It is unlikely Paul Pogba will start, even if fit.

In goal, David de Gea has recovered from the injury he sustained against Southampton on Sunday but the manager might allow Dean Henderson to keep his place and give De Gea extra time to recover and regroup.

The rest of the defence we expect to be unchanged.

With all that in mind, this is our predicted starting XI for tomorrow’s game: 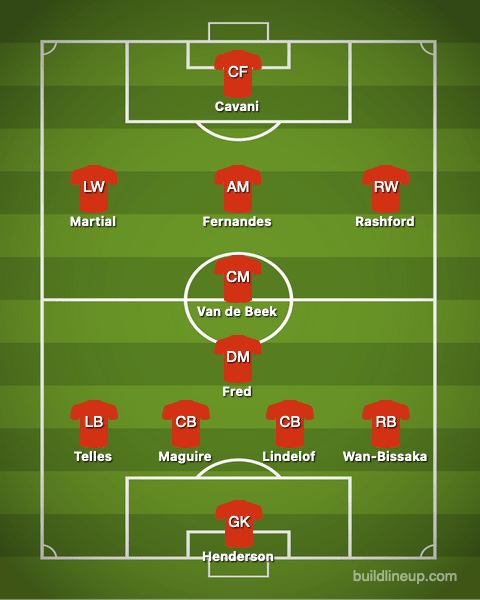