After Manchester United’s disappointing 3-1 home defeat to Paris St Germain last night, manager Ole Gunnar Solskjaer was adamant that his side had been the better team and that it was just a lack of clinical finishing that cost the side the game.

‘I think you look back at that game and the chances we created and you feel we deserve to go through,’ the boss said.

‘But you need to be more clinical, you need to take your chances, definitely. But you’ve got to say the boys did create those moments and chances, that’s the big positive.

‘We should have been more clinical, of course, we know that. More quality with the finish and then you’re celebrating. But that’s football. It’s always decided in the boxes with that quality.

‘Sometimes it goes for you, sometimes against you and definitely tonight it went against us. We didn’t deserve to lose.’

It is concerning, to say the least, that the manager believed his side deserved to win or indeed that it was only poor finishing that was the difference between the two sides.

It is of course true that Anthony Martial managed to scoop what should have been a simple tap-in over the bar in the second half. But to blame this result on finishing – which has become a bit of a pattern in Solskjaer’s post-match pressers of late – is to completely ignore the real problems at the club.

It should also be noted that United’s one and only goal came from a huge deflection – it was a slice of luck for United, making them the luckier of the two sides on the night in front of goal.

Edinson Cavani, United’s main striker, had one shot – the delightful chip that hit the crossbar. Should he have been more clinical or did he just not get the service?

Marcus Rashford had two shots on target, none off. Anthony Martial’s only shot off target was that howler. Bruno Fernandes had one shot on target and one blocked.

These figures are not those of an attack who squandered chances.

In fact, United created only two big chances in the game, missing them both. PSG created six and missed three. 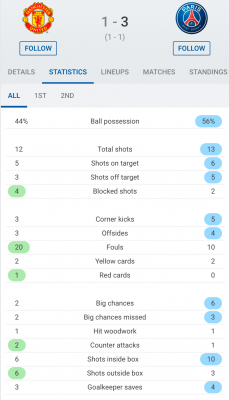 What good does it serve Solskjaer to hang his forwards out to dry after a match like that when the real problems clearly lie elsewhere?

Solskjaer fails to see what the majority of fans and pundits try to tell him, time after time. That David de Gea is a liability right now. That Scott McTominay and Fred are excellent workhorses but produce nothing creatively that could feed those hungry forwards with more chances. That unless injured, Donny van de Beek should be in the starting XI as he is arguably the one midfielder United have who can both defend and produce that quality. That United’s defensive organisation is a shambles and needs a massive overhaul. That he is too slow to make substitutions when it is obvious they are needed – as evidenced in a video yesterday of Bruno Fernandes desperately signalling to him the need for changes during the second half.

Solskjaer also has to look at his own tactics and accept that they too need a huge overhaul. He did not respond in any way to PSG’s changes in the second half and was punished for it.

But by far the biggest reason on the night that United lost was that Fred was sent off and responsibility for this must, in the majority, fall on Solskjaer, who should have substituted the player at half-time. Everyone could see that he had escaped an earlier second yellow and that he was going to be targeted in the second half.

These are not centre-backs, they are key players who cover every blade of grass on the pitch. They need to be rotated.

There are a lot of fans who argue that United were beaten by one of the best sides in the world and that this sort of criticism is disloyal and unrealistic. But, let’s face it, this was another poor performance. PSG are struggling domestically and were ripe for the taking, but United were rudderless.

Every United fan wants the club to be successful and for Ole Gunnar Solskjaer to come good as a manager. But as we reach the two year anniversary of his appointment to the role on a caretaker basis, it is perhaps time to accept that he is never going to get there.