Manchester United manager Ole Gunnar Solskjaer is expected to revert to a 4-4-2 diamond formation for tomorrow’s trip to London to face West Ham.

The boss is unlikely to change the defence that conceded three goals against PSG in midweek, leaving the likes of Dean Henderson, Brandon Williams and Axel Tuanzebe waiting again for their first Premier League starts of the season.

In midfield, Donny van de Beek’s fine recent performances should earn him a place despite missing out in midweek, but Solskjaer will keep his ‘go to’ pairing of Fred and McTominay in the more defensive roles, especially as Fred will be suspended for Tuesday’s Champions League clash against RB Leipzig. The undroppable Bruno Fernandes will be at the tip of the diamond.

This leaves the two forward positions, which are difficult to predict. Anthony Martial is off form, Marcus Rashford is doubtful for the game due to an ongoing shoulder injury and Solskjaer could well want to rest Edinson Cavani for Tuesday’s game. Mason Greenwood and Odion Ighalo are other options but Solskjaer’s tendency is to stick with what he knows, which would mean Martial and Rashford, if fit. 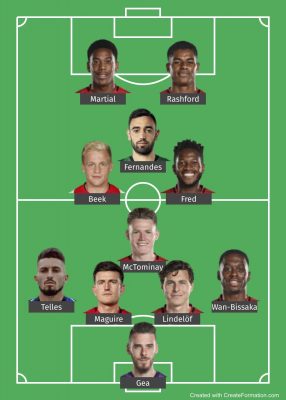