Home » Predicted XI vs RB Leipzig: three at the back, two up top

Predicted XI vs RB Leipzig: three at the back, two up top

Edinson Cavani, Anthony Martial and Fred are all ruled out of tomorrow’s crucial Champions League Group H tie against RB Leipzig, but Luke Shaw is available again after recovering from a hamstring injury.

United need a point from the match to progress to the knockout stages, but manager Ole Gunnar Solskjaer said at today’s press conference that the team will go out to win the game rather than playing for the draw.

Having said that, Solskjaer likes to play with three at the back in big away fixtures and with two forwards and a key midfielder missing, we think he will play the extra defender in a 3-5-2 formation.

This could see Shaw being thrown straight back in as the third centre back alongside Maguire and Lindelof, although Axel Tuanzebe could also be used if Shaw is not deemed ready to play a full 90 minutes.

Alex Telles and Aaron Wan-Bissaka would operate as wing backs. We think Nemanja Matic could get the nod over Scott McTominay as the holding midfielder. Solskjaer generally favours the Scotsman but Matic’s greater experience at European level might tip the balance in his favour.

Mason Greenwood and Marcus Rashford are expected to start up front and Bruno Fernandes is a given in the number 10 role, which leaves one more midfield role up for grabs. Paul Pogba’s goal on Saturday should have him buzzing with confidence so we think he will get the nod, although Donny van de Beek will put in a better defensive stint so may be preferred.

With all that in mind, this is our predicted XI for tomorrow’s match: 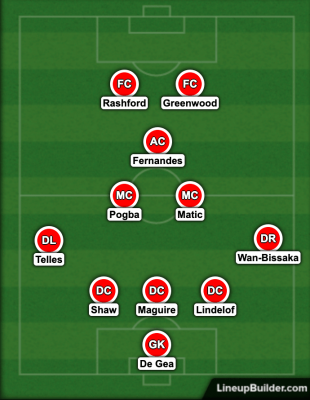