Manchester United manager Ole Gunnar Solskjaer will have an almost fully fit squad to choose from for tomorrow’s derby match against City.

The manager has stated that Anthony Martial will take part after recovering from injury. He also confirmed that ‘Edinson [Cavani] has been on the grass but I’ll make a decision later on’. This would suggest to us that the Uruguayan might be more likely to start on the bench.

Solskjaer also hinted that David de Gea would keep his place in the side despite another disappointing game in midweek.

‘I think David’s a top goalkeeper and rightly so he’s on lists of being the best goalkeepers in Europe,’ he said, referring to De Gea’s nomination on FIFPro’s 55-man player of the year list.

‘He’s a man we really rely on and I don’t think he’s affected by criticism.’

As the back five system clearly didn’t work in midweek, we think Solskjaer will revert to a back four. Despite Alex Telles having performed solidly since taking over from Luke Shaw at left back, we think the boss could stick with the Englishman, as he tends to opt for players he knows well and trusts, especially when his back is to the wall.

Fred will be available again after the midweek suspension but having been dropped against West Ham after the PSG sending off, is he in Ole’s bad books or will he be recalled? We think all will be forgiven and forgotten and that the Brazilian’s energy will be badly needed to battle City’s midfielders.

For the other defensive midfield spot, Paul Pogba will probably be consigned to the bench after his agent’s inflammatory behaviour in midweek. Solskjaer still seems reluctant to put his faith in Donny van de Beek and so it will probably be either Scott McTominay or Nemanja Matic, with the former probably preferred.

With Cavani doubtful, the Norwegian could well return to the Greenwood – Martial – Rashford front three with Bruno Fernandes sitting in the number 10 role.

With all that in mind, this is our predicted XI for tomorrow’s match: 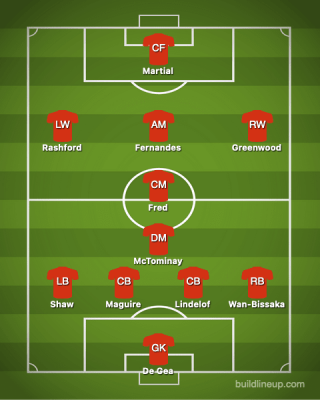