Manager Ole Gunnar Solskjaer should still have sufficient fire power to call on in a game United are expected to win comfortably. Chris Wilder’s side have had a terrible start to the season, picking up just one point from twelve games.

With just three days to recover before a trickier home tie against Leeds United, we expect the boss to rest a couple of players, although he will keep the spine of the team intact.

Dean Henderson could be given a rare chance in goal against the side for whom he kept goal for two seasons while on loan from United.

Alex Telles is likely to be recalled at left-back against a side that has only scored five times this season. This will give the more defensive-oriented Luke Shaw a rest after his energetic performance against Manchester City at the weekend, otherwise we think the defence will be unchanged.

Whilst a 4-4-2 diamond formation could be tempting, we think Solskjaer will play 4-2-3-1. He is usually reluctant to leave out Fred and Scott McTominay and could well stick with them in the holding midfield positions, although Nemanja Matic is another option.

Bruno Fernandes and Marcus Rashford are also due a rest but again, the manager is also usually reluctant to do so, so they will probably still start. Paul Pogba and Donny van de Beek are alternatives.

Mason Greenwood could be rested on the right wing, with Dan James or Juan Mata given a run out in his place.

Anthony Martial will almost certainly be recalled to the centre forward position and Solskjaer will hope he can finally get off the mark in the Premier League this season against a defence that has let in 21 goals so far.

With all that in mind, this is our predicted line-up for the game: 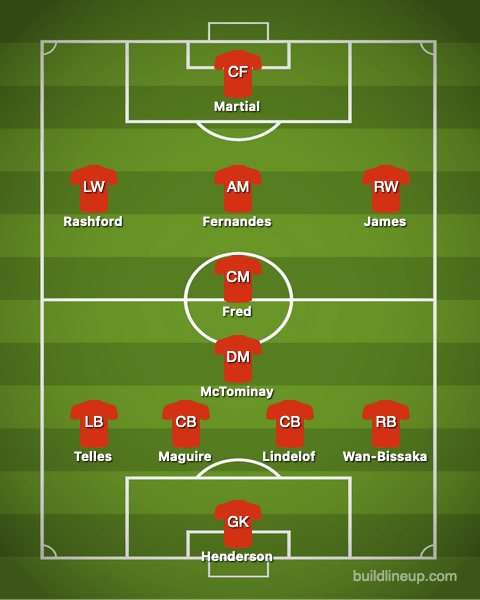