Edinson Cavani is still a doubt after picking up a groin injury but could be available. Otherwise, it is ‘as you were’, with just long-term absentees Phil Jones and Marcos Rojo definitely ruled out.

Solksjaer rested David de Gea, Scott McTominay and Fred on Thursday so they are likely to be recalled. De Gea’s understudy, Dean Henderson, made an error against Sheffield United on Thursday which will not help his cause in keeping the Spaniard out of the team. Likewise, Nemanja Matic put in a pretty anonymous stint against the Blades and so is likely to make way.

At left back, Luke Shaw may also be brought back in ahead of Alex Telles to face an aggressive Leeds side that are going to adopt a high press against United.

Further up the pitch, the form players are arguably Paul Pogba, Marcus Rashford, Bruno Fernandes and Anthony Martial. If the manager wants to accommodate them all then a 4-4-2 diamond is the most likely formation, with Mason Greenwood dropping to the bench.

It would be tough to drop Greenwood, who scored a beautiful goal against West Ham recently, but he has started the last four games and may be due a break, with the boss always wary of burnout due to his tender age.

Donny van de Beek is another option and another start is probably overdue for the Dutchman, but Solskjaer will more likely leave that for the EFL Cup trip to Everton on Wednesday. 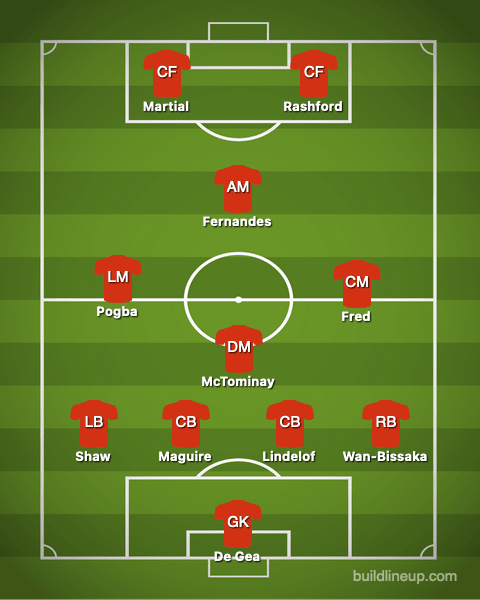