Today marks the second anniversary of Ole Gunnar Solskjaer taking the helm at Manchester United and his ability to do the job is still a matter of much debate among fans and the media.
The Telegraph has published statistics comparing the win percentage Manchester United managers across history who completed at least the 110 games that Solskjaer has and the results are surprising. 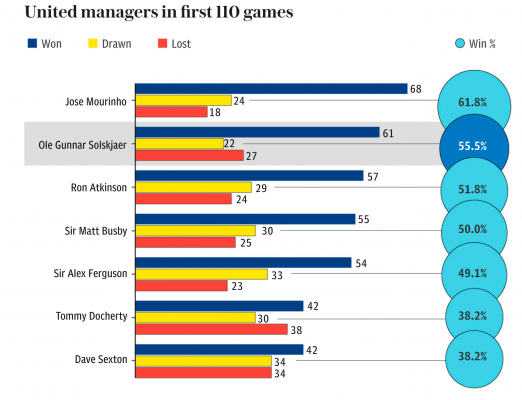 Solskjaer is second only to José Mourinho, with a win percentage of 55.5%, better than the likes of Sir Alex Ferguson and Sir Matt Busby after the same number of games.

Some would argue that registering a lower rate than his predecessor indicates that Solskjaer has sent the team backwards whereas others will argue that to outscore all United’s other managers whilst playing attacking and attractive football under difficult circumstances is a fantastic achievement.

The simple win percentage figure does not take into account the difficulty in the competitions played. For example, Solskjaer has won just four out of 10 Champions League matches, for a win percentage of 40%, but his 75% wins in his relatively easier 12 Europa League matches pulls his overall average up.

Mourinho, by contrast, won eight out of 14 Champions League matches (57%) and 10 out of 15 Europa League (67%), a significantly better achievement overall.

Mourinho also brought three trophies home in his two years at Old Trafford while Solskjaer is yet to register his first for the club as a manager.

However, the Norwegian’s devotees will point out that to some extent, Mourinho’s success was built on sand, with little attention to grass roots or the DNA of the club and great reliance on big name signings. Solskjaer, on the other hand, is in the middle of a rebuilding process that is seeing a massive improvement in United’s academy, the bringing on of young talent in the senior squad such as Mason Greenwood and Dean Henderson and a togetherness and team spirit that should foster loyalty and achievement in the long run.

The biggest problem Solskjaer has to overcome as he moves into his third year at the club is consistency. He has proven time and again that he can field a side capable of going on impressive runs and beating just about anyone – two wins over PSG for example are testament to that – but those same sides can endure woeful barren spells and record dismal losses that leave fans exasperated and exhausted.

If that issue can be resolved, then there is no reason why Solskjaer cannot go on to become one of United’s longest serving and successful managers of all time.

Red Billy is the chief editor of The Peoples Person, author of three books and totally obsessed with football's transfer market. Always glad to get feedback - write to redbilly (at) thepeoplesperson.com.