With a tough away Premier League tie against Leicester City awaiting the Red Devils on Saturday lunchtime, resting players will be high in the manager’s mind despite this being a quarter final he will desperately want to win.

There will probably be some enforced changes, with Luke Shaw having come off against Leeds due to sickness and Scott McTominay suffering a groin injury near the end of the game. Alex Telles and Nemanja Matic, respectively, will probably replace them.

Victor Lindelof will almost certainly also be rested due to his ongoing back complaint, with Axel Tuanzebe or Eric Bailly substituting, but Solskjaer is always loath to rest captain Harry Maguire so he will probably retain his place.

Bruno Fernandes and Marcus Rashford could be kept in cotton wool ahead of the trip to Leicester. Fred and Anthony Martial are also arguably due for some R&R.

The boss has given Donny van de Beek, Brandon Williams and Dean Henderson runs out in previous EFL rounds and will possibly do so again.

Edinson Cavani, Paul Pogba and Mason Greenwood may also be recalled to freshen things up.

Dan James’ promising performance on Sunday may see him keep his place, which could mean that the likes of Juan Mata and Jesse Lingard miss out again, although Solskjaer has confirmed that the latter will ‘be involved in the squad definitely on Wednesday’.

It is a tribute to the ever-increasing strength in depth that even with nine changes, it still looks like a strong line-up and United can be confident of progressing to the semi-finals: 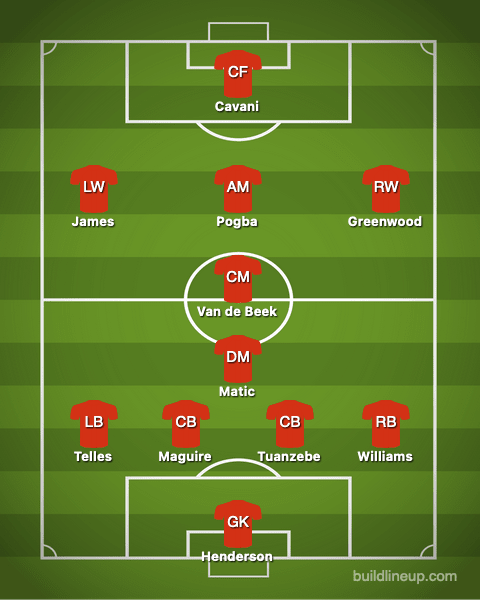