At the time of writing, Manchester United have no new injury concerns ahead of tomorrow’s Premier League clash with Leicester City.

Scott McTominay is likely to miss out after sustaining a groin injury at the end of his fantastic performance against Leeds last Sunday.

Ole Gunnar Solskjaer will probably return to his tried and trusted defence despite the alternatives of Dean Henderson, Axel Tuanzebe, Eric Bailly and Alex Telles keeping a clean sheet with Harry Maguire against Everton on Wednesday.

In midfield, Fred is likely to return and if McTominay doesn’t make it, the boss will probably choose between Paul Pogba and Nemanja Matic, depending on how adventurous he is feeling.

Solskjaer has used Mason Greenwood sparingly this season and may be tempted to retain Edinson Cavani at centre forward, with Marcus Rashford switching to the right wing and Anthony Martial down the left.

It risks upsetting the balance of both Rashford and Martial who have been in great form on the left wing and through the middle, respectively, but if fit enough to start again, Cavani will get the nod.

Of course, the manager always likes to spring a surprise or two, such as Dan James’ inclusion against Leeds which turned out to be a masterstroke. So we could even see Juan Mata or Jesse Lingard on the right wing with Cavani and Greenwood being used as impact subs if needed.

With all that in mind, here is our predicted lineup for the game: 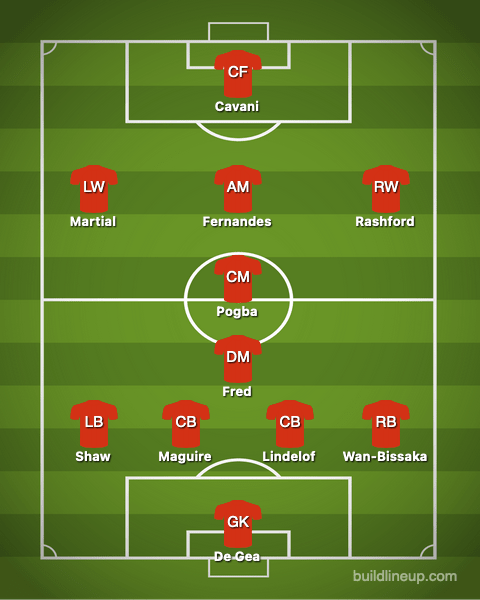