Edinson Cavani to start as Manchester United look to attack

Wolverhampton Wanderers are Manchester United’s opponents tomorrow evening as the Red Devils look to close the gap between them and Liverpool to just two points at the top of the Premier League.

United have had over 30 hours’ more preparation time for the tie than their opponents, who held José Mourinho’s Spurs to a 1-1 draw at Molyneux yesterday evening.

Ole Gunnar Solskjaer has three doubts for the fixture, with right-back Aaron Wan-Bissaka set to miss out again with an undisclosed injury.

Victor Lindelof’s back problems are in danger of causing him to also miss the game. Solskjaer said after the Leicester game ‘Yeah he’s struggling with his back. He’s struggled for a little while. We might have to do something. Let’s see what it is.’

If both miss out, the most likely scenario is for Axel Tuanzebe to return at right back and Eric Bailly to continue at centre-back.

Dan James picked up a knock against Leicester and may also be unavailable.

As it’s a home game, an attacking option is more probable and with Greenwood seemingly out of favour this season and Cavani performing heroics of late, that almost certainly will mean that the Uruguayan will get the nod in a 4-2-3-1 formation.

With all that in mind, here is our predicted starting XI for tomorrow’s match: 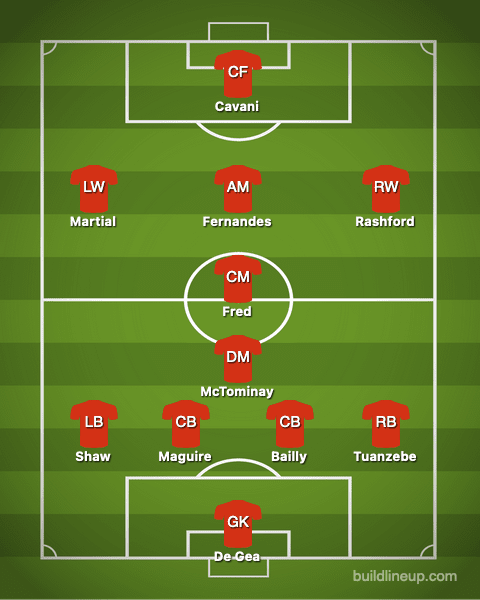