Ole Gunnar Solskjaer has reported no new injury problems ahead of tomorrow’s Premier League tie with Aston Villa and has a strong squad from which to choose.

There may be some tired legs after Tuesday’s hard-fought 1-0 victory over Wolves and with the Carabao Cup semi-final against Manchester City just around the corner, the manager may feel the need to freshen up a little, although he will not want to interrupt the side’s rhythm with too many changes.

Another try with the 4-4-2 diamond looks possible. This will sacrifice an out-and-out forward player in favour of an extra midfielder, but could be ideal against Villa’s 4-2-3-1. An extra central midfielder could also help cut the supply off to Villa’s star man, Jack Grealish, in the number 10 position.

The manager has not stated whether Victor Lindelof has recovered from his back injury so the defence could retain Eric Bailly, with Shaw coming back in for Alex Telles, who was subbed at half time against Wolves.

Scott McTominay and Fred are in line for a recall having been rested against Wolves and Bruno Fernandes would almost certainly occupy the tip of the diamond. This leaves one other midfield slot, which could see a rare start for Donny van de Beek, who has more of the box-to-box energy that will serve the formation well than the more static Paul Pogba.

Up front, following the news of Edinson Cavani‘s three-match ban, Anthony Martial will almost certainly be recalled having been rested against Wolves. As Marcus Rashford is always one of the boss’s first names on the teamsheet, it leaves Mason Greenwood to be the one who will probably drop back to the bench.

This, then, is our predicted line-up for the Red Devils’ first match of 2021: 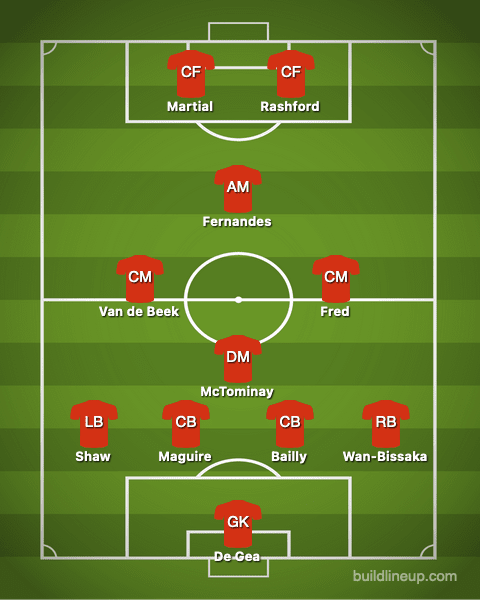