The Uruguayan Football Players Association has issued a strong statement accusing the FA of racism and demanding that Edinson Cavani’s three match ban and fine are overturned.

The punishment was administered by the Football Association after Cavani commented ‘Gracias Negrito’ on a friend’s Instagram post before hastily deleting it and apologising for any offence caused.
The FA ruled that the comment was an ‘aggravated breach’ of its rules because it included ‘reference, whether express or implied to colour and/or race and/or ethnic origin’.
As reported here earlier, a Uruguayan academic institution has already issued a statement condemning the FA’s actions and the player’s union has now gone a step further, demanding that the decision is revoked.
‘We must condemn the arbitrary conduct of the English Football Association,’ the statement reads.
‘Far from condemning racism, the English Football Association has itself committed a discriminatory act against the culture and way of life of the Uruguayan people.
‘The sanction shows the English Football Association’s biased, dogmatic and ethnocentric vision that only allows a subjective interpretation to be made from its particular and excluding conclusion, however flawed it may be.
‘Edinson Cavani has never committed any conduct that could be interpreted as racist. He merely used a common expression in Latin America to affectionately address a loved one or close friend.
‘To sustain that the only way to obtain a valid interpretation in life is that which lies in the minds of the managers of the English Football Association is actually a true discriminatory act, which is completely reprehensible and against Uruguayan culture…
‘We would therefore like to publicly defend Edison Cavani’s impeccable character and of course our country’s culture…
‘The English Football Association expresses absolute ignorance and disdain for a multicultural vision of the world, respectively of its plurality, by erroneously, unilaterally and rigidly imposing its anti-racist rules…
‘It has not just punished one person, but also our whole culture, our way of life, which is truly a discriminatory and racist act…
‘We request the FA to immediately overturn the sanction imposed on Edinson Cavani and reinstate his good name and honour in the world that has been so unfairly tarnished by the reprehensible decision.’ 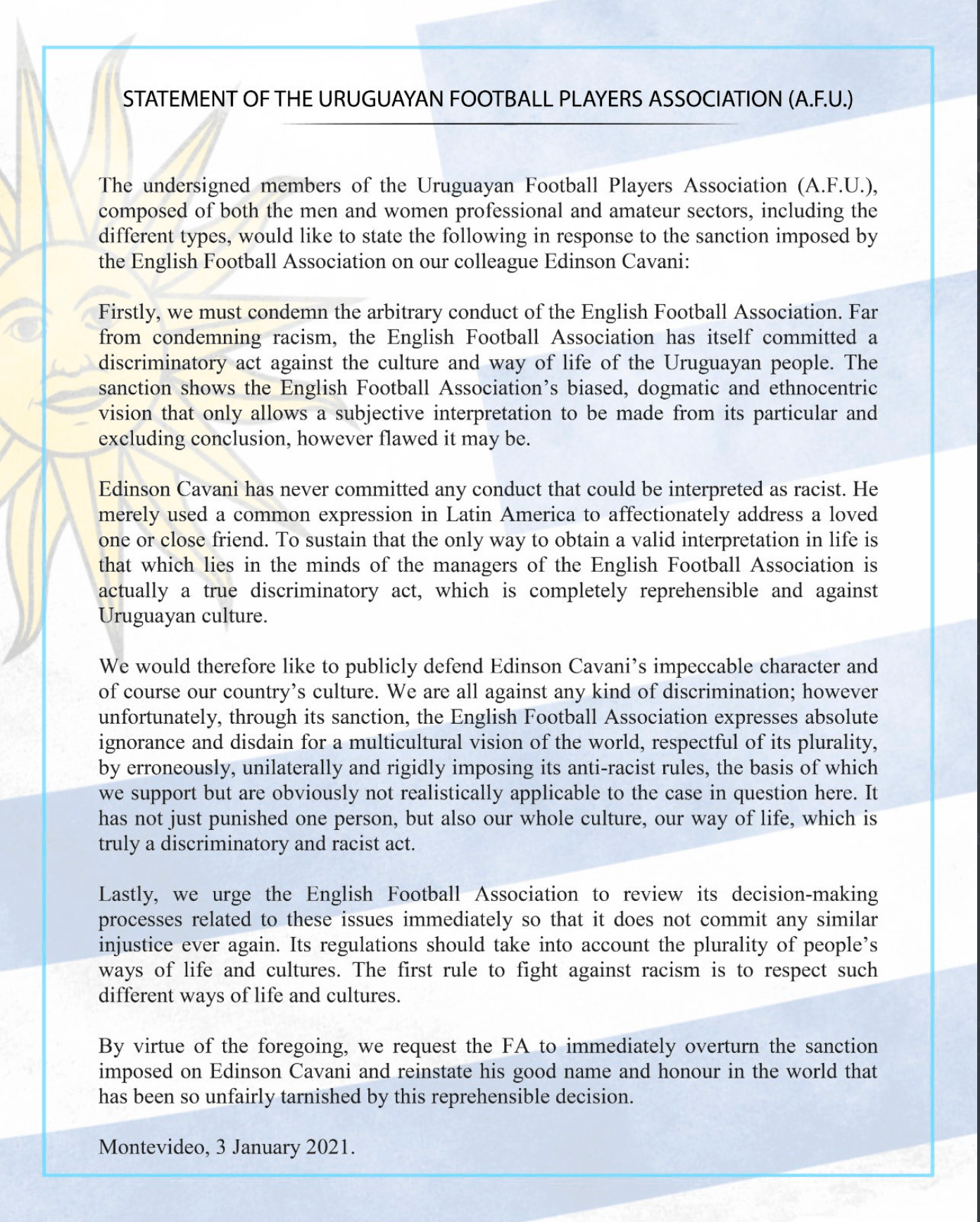