This means that Victor Lindelof must have recovered from his back injury and Solskjaer will therefore have a difficult selection dilemma after Eric Bailly’s impressive recent form.

Solskjaer often chooses a more defensive 3-5-2 formation against more elite sides and so he may do that again, in which case both Lindelof and Bailly can be accommodated.

On paper, Alex Telles is the more attacking left-back in the squad and is therefore better suited to the wing back role. However, he is yet to really hit the ground running since arriving from Porto in October and Luke Shaw has been playing well. He will therefore probably start.

Aaron Wan-Bissaka did well going forward against Aston Villa on Friday and registered an assist, so he is likely to keep his place at right back despite some poor defending of late.

With Cavani suspended and Mason Greenwood generally out of favour this term, Marcus Rashford and Anthony Martial will almost certainly be the front two. Bruno Fernandes is the first name on the team sheet in the number 10 (or eight and a half) role, which would leave just two midfield places up for grabs.

Paul Pogba was excellent last time out, but Scott McTominay did not have a good game. Nemanja Matic has also hit a good vein of form so we think a Pogba-Matic combination tucked behind Fernandes is likely, with Fred the unlucky victim of the proposed formation.

Whatever the case, with a relatively easier FA Cup fixture against Watford next on the agenda, Solskjaer will have the luxury of being able to field his strongest side without too many concerns about resting players. 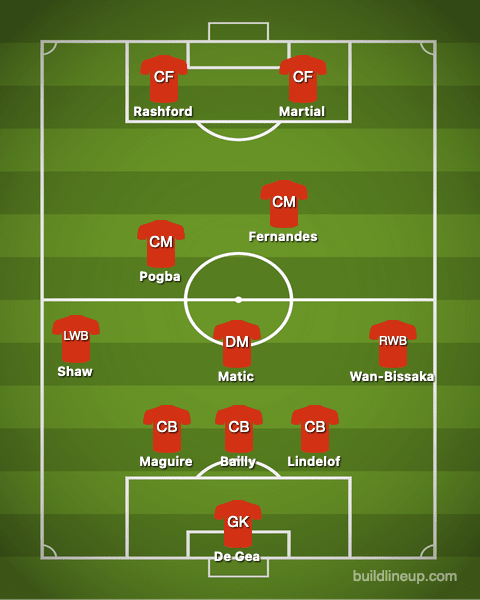