Man United believe Jack Grealish deal can be made this summer

The Red Devils were widely reported to be chasing Grealish in the summer transfer window, but Villa’s survival in the Premier League allowed them to slap a prohibitive £80 million price tag on his head which United were unwilling to pay.

Attention was turned to the more budget-friendly Donny van de Beek, but Grealish has gone from strength to strength in the Premier League this season while the Dutchman is yet to find his feet in English football.
But now with Paul Pogba’s United career reportedly set to end in June, another space will probably be opening up for the versatile playmaker and The Athletic’s Laurie Whitwell believes that the Midlands club might be more sympathetic on price if Grealish pushes for a move to a Champions League club.
‘The interest is still there from United … even if priorities are currently elsewhere,’ Whitwell says.
‘A summer bid is dependent on Pogba’s status and Villa’s financial demands. It is believed Grealish’s price is £90 million minimum after he signed a new contract last summer.
‘There is a feeling, however, that after a second season among the Premier League’s best creators and an international breakthrough, he is ready to take that next step to a Champions League club — a trajectory Villa appreciate.’
Another fine performance at Old Trafford last Friday will have further whetted Solskjaer’s appetite for the England man, who is arguably the Premier League’s most creative player, as this chart also published by The Athletic demonstrates. 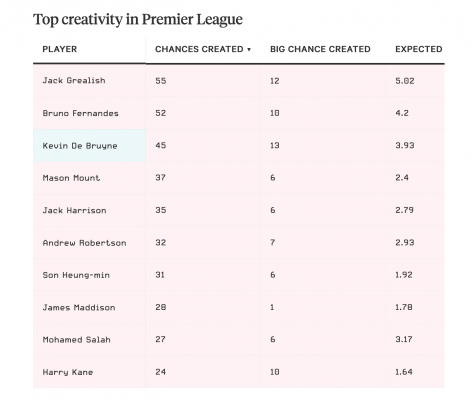 There may be competition for the 25-year-old’s signature in the form of United’s neighbours, Manchester City. Both sides would need to find a role for him that would complement their star playmakers, Bruno Fernandes and Kevin de Bruyne, respectively.

‘Fernandes has that No 10 role under lock and key for United at the moment but against Villa, he did rotate with Pogba, who ostensibly started on the left of a three in a 4-2-3-1 but had a licence to roam,’ Whitwell notes.
‘Grealish could add a new dimension to United given his dribbling ability.’