Manchester United’s Marcus Rashford has been ranked as the most valuable player in the world.

The list, compiled every two years by the CIES Football Observatory, only includes players in Europe’s ‘big five’ leagues, but realistically there is no player outside of those leagues who would currently be ranked higher.

CIES uses a formula that takes into account the time remaining on a player’s current contract to determine what transfer fee he would command if he was to be sold at this moment in time.

This means that Rashford, with more than two years left on his contract with the option of a further year, has an estimated value higher than the likes of PSG’s Kylian Mbappe, who only has 18 months left on his.

Rashford’s value is calculated as £150.1 million, £12.3 million more than second placed Erling Haaland. The Norwegian’s value is probably reduced because he has a buyout clause on his contract of a reported €75 million that becomes active in June 2022.

Liverpool’s Trent Alexander-Arnold is ranked third, just £0.4 million behind Haaland, and United’s Bruno Fernandes is just half a million behind him at £136.9 million.

The Red Devils’ next most valuable player is Mason Greenwood, ranked 24th at £91 million. Anthony Martial is 37th with a value of £74 million.

‘With only six months of contract remaining, Lionel Messi just makes the top 100 list: 97th with an estimated value of €54M. Despite his excellent performances, 35-year-old Cristiano Ronaldo (€47M) is only 131st.’ 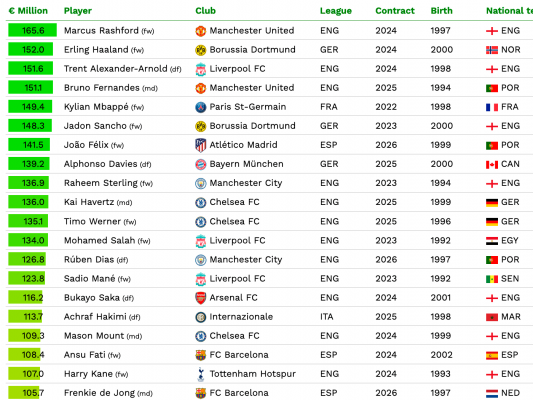