The Manchester United team to face Watford tomorrow in the FA Cup third round will see a number of changes, Ole Gunnar Solskjaer has confirmed.
In the pre-match press conference, the manager said ‘There’s a few players that’s had a few knocks and there will be a few changes but we’ll still field a team I’ll feel confident in.’
He also confirmed that Odion Ighalo will play some part before letting it slip that it will be from the bench, saying ‘He will be involved … hopefully I won’t need to bring him on in that we need goals but hopefully that he can join in.’
There had been speculation that Facundo Pellistri would also be involved but he has tested positive for Covid-19 and is self-isolating.
Amad Diallo has not yet been able to join the senior squad so it will be too soon for him.
Nonetheless, we expect wholesale changes with two huge Premier League games looming against Burnley on Tuesday, which could take United to the top of the league, and rivals Liverpool on Sunday.
One name that seems to be permanently on the teamsheet unless injured is Harry Maguire and Dean Henderson could keep his place in goal, but other than that Solskjaer could make changes in every position.
Donny van de Beek should surely get a chance to start in midfield and Alex Telles, Axel Tuanzebe and Mason Greenwood are also due another start.
Eric Bailly could also return with Victor Lindelof rested and Nemanja Matic should also be fresh after missing out against Man City on Wednesday.
Solskjaer could also give Dan James another run out and both Juan Mata and Jesse Lingard are long overdue a game.
With all that in mind, here is our predicted XI for tomorrow’s 8pm kick-off at Old Trafford: 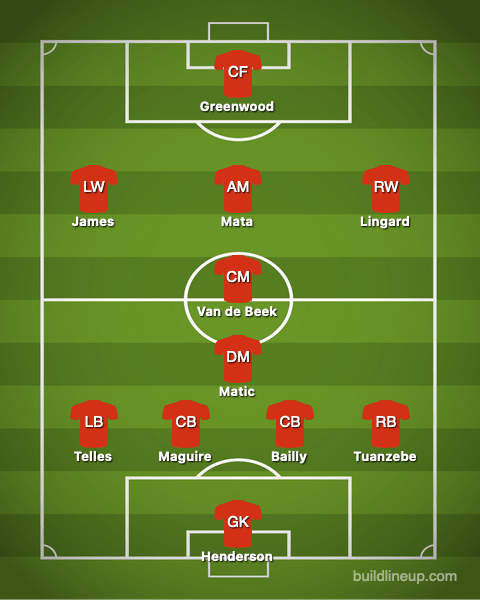