Burnley may be without eight players for Man United fixture

The Burnley side that stands between Manchester United and a return to the top of the Premier League will be without at least four stars due to COVID protocols.

The news will come as a huge boost to United boss Ole Gunnar Solskjaer, who himself is sweating on the fitness of Victor Lindelof, Luke Shaw, Paul Pogba and Eric Bailly ahead of the crucial game.

The Burnley players have not been named but Josh Brownhill, Ashley Westwood, Jimmy Dunne and Bailey Peacock-Farrell were not involved in Saturday’s FA Cup clash against MK Dons, giving rise to speculation that they are the ones involved.

Meanwhile, keeper Nick Pope was benched for the MK Dons game as he nurses an ankle injury but is expected to make the game, However, Kevin Long, Charlie Taylor, Dwight McNeil and Jay Rodriguez didn’t feature at all after missing previous games due to injury.

Manager Sean Dyche said he was hopeful that those four would be fit ‘if not for Tuesday then a very strong chance going into the next one,’ suggesting that there could be eight absences – or even nine if Pope doesn’t make it – for the claret and blues for tomorrow’s game. 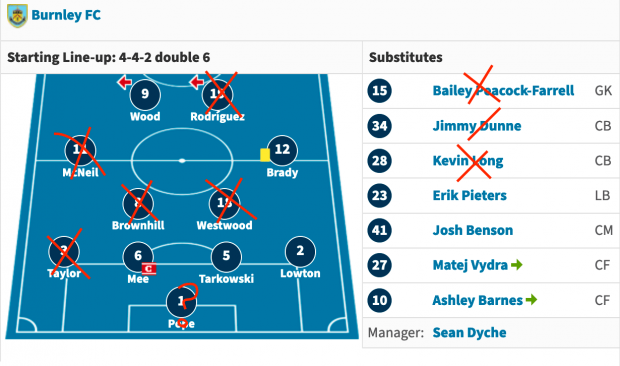 Ole Gunnar Solskjaer will provide an update on United’s own injured stars at this afternoon’s press conference which we will cover here on The Peoples Person as it happens.