Edinson Cavani to lead the line – predicted XI vs Burnley

Manchester United head to Turf Moor to face a decimated Burnley side tomorrow knowing that a win will put them top of the Premier League for the first time since 2018.

Speaking in the pre-match press conference ahead of tomorrow’s game, manager Ole Gunnar Solskjaer had good news on the injury front and revealed that Victor Lindelof, Luke Shaw, Paul Pogba Eric Bailly had trained and could all be available tomorrow.

He added that Lindelof and Shaw had trained all day, suggesting they would be available, but of Pogba and Bailly he said ‘let’s see with Paul and Eric, how they are tomorrow.’

Lindelof will probably therefore return alongside Harry Maguire in central defence even if Bailly does make it and Shaw will almost certainly replace Alex Telles.

David de Gea and Aaron Wan-Bissaka are also likely to be recalled.

In midfield, Scott McTominay could be rested having played 90 minutes against Watford on Saturday, with Nemanja Matic his natural replacement. With Pogba a doubt, Fred will almost certainly return alongside him.

Up front, Edinson Cavani should be fresh after his three match ban, so he is likely to lead the line with Anthony Martial and Marcus Rashford on the wings and Bruno Fernandes returning in the number 10 role.

All the above means that Solskjaer will field a 4-2-3-1 formation as follows: 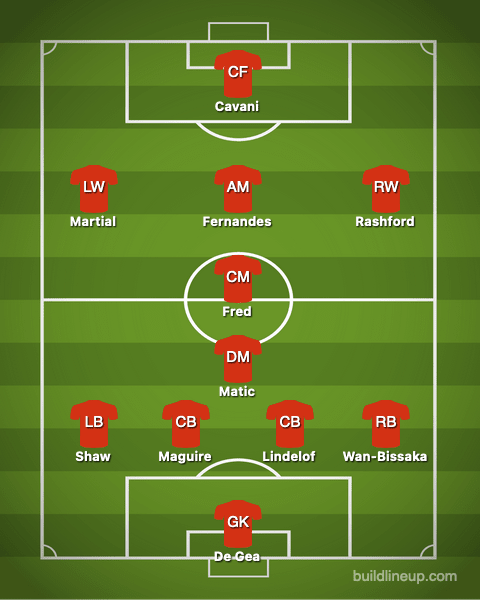