Ole Gunnar Solskjaer has a couple of injury doubts ahead of Sunday’s Premier League clash with Liverpool at Anfield.

One of those is Anthony Martial, who appeared to pick up a groin strain toward the end of the Burnley match on Tuesday.

Solskjaer said at yesterday’s press conference ‘Anthony is not out of it, the only ones that are certainly out are Brandon and Phil Jones … A couple of others may be doubts but we’re keeping our fingers crossed.’

The manager often likes to play with a back three against big clubs and given the doubts over Martial’s fitness, he could be left on the bench even if he passes fit in order to accommodate the extra centre back.

On the other hand, the boss will want to recall Scott McTominay and Fred for the game having rested them against Burnley. Their workrate and energy is invaluable in tougher games. But Paul Pogba’s current form makes him almost impossible to drop. Another possibility is therefore to switch to a 4-4-2 diamond, again with Martial dropping out.

If as we expect Solskjaer does opt for the diamond and both Eric Bailly and Victor Lindelof are fit, the manager has another selection dilemma. He has stuck by the Lindelof/Maguire partnership through thick and thin so far but, like Pogba, Bailly has been a breath of fresh air and playing world class football that will make him hard to drop.

It’s a difficult one to predict but we think Soslkjaer will stay loyal to the Lindelof/Maguire tandem, so with all that considered, this is our predicted XI for tomorrow’s game: 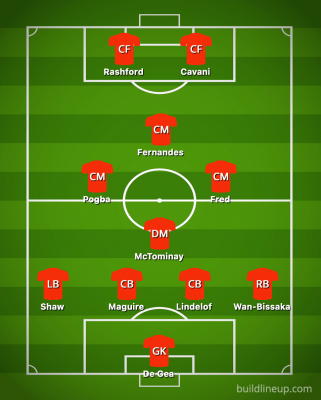