Home » Predicted XI for FA Cup fourth round vs Liverpool

Predicted XI for FA Cup fourth round vs Liverpool

Manchester United manager Ole Gunnar Solskjaer has hinted he will rest a number of players for tomorrow’s FA Cup clash against Liverpool at Old Trafford.

Speaking at the pre-match press conference ahead of the fixture, the boss said ‘we’ll rotate, that’s for sure, we’ll put a decent team together of course, a team I feel that can win the game.’

The inference that can be drawn from his words is that he will not be fielding his entire first string.

This could mean that Dean Henderson will be given another opportunity to impress in goal and that Alex Telles and Donny van de Beek will also be given a start and a chance to stake a claim for more regular selection, with Luke Shaw and Bruno Fernandes making way.

The manager confirmed that Victor Lindelof will return having missed out on Wednesday’s game at Fulham. With Aaron Wan-Bissaka struggling for form at the moment, the boss might once again put Lindelof at right back and keep the Eric Bailly and Harry Maguire partnership together for a second successive game.

Scott McTominay and Marcus Rashford were both rested against Fulham so will probably start. Making way could be Fred and Edinson Cavani.

Despite the fact that Paul Pogba is on fire at the moment, the boss might be concerned about overplaying him, so he too may be rested. Nemanja Matic could come in.

Another candidate for a break is Anthony Martial. This could mean Mason Greenwood moving into the striker’s role with Rashford on the left and Juan Mata on the right, or Rashford up front with Greenwood staying on the right and Dan James coming in on the left.

It will be interesting to see whether Amad Diallo makes the squad as a wildcard for Solskjaer, who hinted recently that he could throw him in the mix in the near future. However, he is highly unlikely to be in the starting XI.

With all that in mind, this is our predicted line-up for the game: 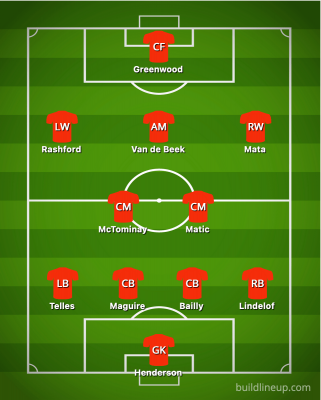