Manchester United manager Ole Gunnar Solskjaer confirmed at today’s pre-match press conference that Marcus Rashford has recovered from a knee injury and that he has an almost full-strength squad at his disposal again for tomorrow’s home Premier League tie against bottom-of-the-table Sheffield United.

With a more difficult tie against Arsenal at Highbury looming on Saturday, the boss may again decide to rest a couple of key players as he did in the FA Cup.

One of those might be Edinson Cavani, who has played two full games in the past week. He could be replaced by Anthony Martial, who was rested on Sunday other than a short substitute appearance.

Whether Rashford will be risked or put in cotton wool remains to be seen, but we think he will play, with Mason Greenwood perhaps also allowed to recharge his batteries after two starts. Juan Mata or Dan James could come in.

Bruno Fernandes is almost certain to return after being rested against Liverpool.

In midfield, Nemanja Matic is due a run out and Paul Pogba is probably due a rest, having played 90 minutes in the last seven games. Fred will probably return after being rested on Sunday.

David de Gea could return in goal but otherwise the defence should be unchanged, although Eric Bailly and Alex Telles might sneak into the manager’s plans if he thinks Victor Lindelof or Luke Shaw need some R&R.

With all that in mind, this is our predicted line-up for tomorrow’s match: 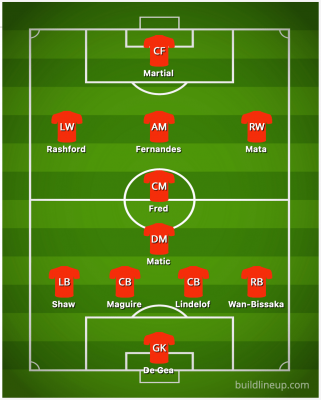