Ole Gunnar Solskjaer has confirmed that Manchester United have no new injury concerns ahead of tomorrow’s Premier League match against Arsenal at the Emirates stadium.

Speaking at today’s press conference ahead of the game, the manager said that Eric Bailly had recovered from the knock that kept him out of the side’s dismal home defeat to Sheffield United in midweek and will be in the matchday squad.

Solskjaer also told the club’s official website that Anthony Martial was fit despite suffering a shoulder injury in the same game and it was also revealed on the site that Brandon Williams is fit and available again, leaving Phil Jones as the only absentee.

Despite Bailly’s availability, Solskjaer is likely to return to his preferred partnership of Victor Lindelof and Harry Maguire at the back and we expect David de Gea to keep his place despite his error for Sheffield United’s first goal on Wednesday. Luke Shaw will return at left back after being rested.

Scott McTominay and Fred were also rested on Wednesday and are Solskjaer’s ‘go-to’ pair for big games. Up front, Edinson Cavani is likely to be recalled. With Bruno Fernandes and Marcus Rashford key players, this leaves just one place up for grabs. Paul Pogba should get the nod ahead of Anthony Martial and Mason Greenwood. It is a slightly more conservative selection of a midfielder rather than a forward, and also the strongest player of the three on current form.

This will require a formation change and Solskjaer could go with something of a cross between a 4-4-2 diamond and a 4-2-3-1 that would see McTominay sitting in front of the back four, Fred slightly ahead of him, Pogba drifting out from midfield to provide width on the right wing and Fernandes in the number 10 slot. Rashford would take up the left wing position but drift in to join Cavani as a second striker when play breaks from the right.

This, then, is our predicted line-up for the game: 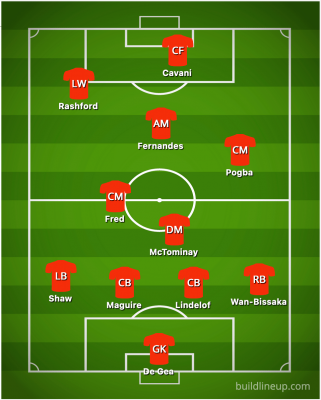