Predicted Man United XI vs Southampton – surprise on the bench?

Manchester United entertain Southampton at Old Trafford tomorrow knowing that three points will put them back level at the top of the Premier League table with neighbours Manchester City.

Manager Ole Gunnar Solskjaer has reported that there are no new injury concerns although there was some ‘wear and tear’ that would be evaluated before selecting his side.

With a short turnaround of just three days after Saturday’s trip to Arsenal, some tired legs might need to be rested. 33-year-old Edinson Cavani could be rotated along with Paul Pogba, who has played 90 minutes of the last nine games.

We do not expect any changes in defence unless Victor Lindelof’s back condition demands that he sits this one out.

Scott McTominay should have recovered from his upset stomach and is likely to start alongside the industrious Fred in the two holding midfield positions.

If Pogba and Cavani are rested, Anthony Martial and Mason Greenwood are the most likely to come back in, with Martial taking the centre forward role and Greenwood the right wing.

All eyes will be on the substitutes’ bench for this game to see if 18-year-old Amad Diallo gets a place in the squad. The youngster was absolutely breathtaking in his debut for the Under 23’s on Saturday and could be a fantastic wildcard option to have on the bench if a stubborn Southampton defence needs to be unlocked.

With all that in mind, here is our predicted lineup for tomorrow’s 8.15pm kick off at Old Trafford: 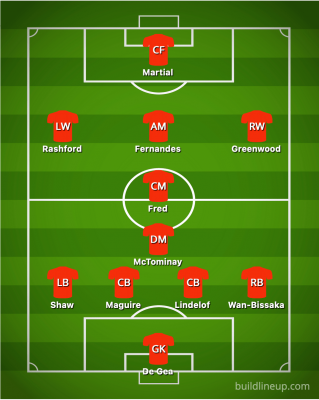