Ole Gunnar Solskjaer says that Eric Bailly is the only doubt as his team prepares for tomorrow’s Premier League match against Everton at Old Trafford.

This will almost certainly mean that Victor Lindelof will partner Harry Maguire in central defence, with David de Gea likely to stay in goal and Aaron Wan-Bissaka and Luke Shaw undroppable in the full-back berths at the moment.

In midfield, Paul Pogba is likely to return after being rested on Tuesday and could partner Nemanja Matic. Solskjaer has played Pogba on the left wing of late, but for a home game it seems more likely he will sacrifice a holding midfielder for a forward and keep the Frenchman in a deeper role.

The manager must be desperate for Anthony Martial to build on his excellent two goal substitute performance against the Saints so he is likely to start. Edinson Cavani should be fresh after recovering from an ankle knock and Bruno Fernandes will almost certainly be in the number 10 role. This leaves a choice between Mason Greenwood and Marcus Rashford on the right wing, with the latter more likely to get the nod.

All in all, we think this will be what the Norwegian believes is his strongest XI as next up is an FA Cup tie with West Ham, when he is more likely to ring the changes. The likes of Greenwood, Donny van de Beek, Alex Telles and Dean Henderson are more likely to get the nod then … although we are getting ahead of ourselves predicting the lineup after next!

With all that in mind, here is our predicted lineup for tomorrow’s 8pm kick-off: 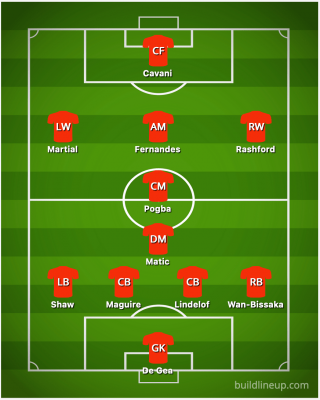