Home » Is Harry Maguire the sloth in the room at Man United?

Is Harry Maguire the sloth in the room at Man United?

There is a lot of anger in the world at the moment and it is hard to write critically about football and footballers at times, knowing that you will be accused of being plastic, negative, disloyal or (the in-word of Covid times) ‘toxic’.

Yet it is hard to talk about Manchester United without mentioning what has become the elephant in the room, although an African bush elephant can run at 40 km per hour, so perhaps we should be talking about the sloth in the room instead.

Harry Maguire is not good enough to lead Manchester United’s defence nor be captain of our beloved club. Pound for pound, Harry Maguire is one of the worst signings in terms of value for money that the club has ever made.

We have spent one and a half seasons now criticising everyone around Maguire (often with good reason) and speculating as to who would be the best partner to compensate for his shortcomings. Someone pacey because he is so slow, someone with good acceleration because he has none, someone who is a good ball playing defender because he is not and someone who is a shouter and leader, who can marshall and organise the defence.

If these are all Maguire’s weaknesses, then what were the tremendous strengths that caused not one, but two Manchester United managers to try to buy him from Leicester City? Is he that good in the air? Is he that positive an influence in the dressing room? Is his work rate that amazing? Eighty million pounds worth?

Why do we need to find someone to compensate for Maguire’s shortcomings? Why don’t we just accept that he is, perhaps, the biggest problem in this current Manchester United side?

Has Victor Lindelof made several mistakes alongside Maguire? Yes. Has David de Gea become ‘Dave might save’ rather than ‘Dave saves’? Yes. Yesterday’s game against Everton clearly demonstrated that there are other problems in United’s defence. But Maguire’s weaknesses played a part in all three goals.

Whilst De Gea was clearly culpable for Everton’s first goal, it was brought about in the first place by Maguire playing Calvert-Lewin onside and being left for dead due to his lack of pace.

Everton’s second goal involved mistakes all round and it looked as if Luke Shaw had been caught out of position when Doucoure received the ball. But if you freeze the action a split second before, you see Shaw having had to come central to mark Calvert-Lewin, who would have been totally open had he not. Why? Because Maguire inexplicably went to the near post, oblivious to where the danger was, and jumpred for the same ball that Lindelof headed away (or tried to). 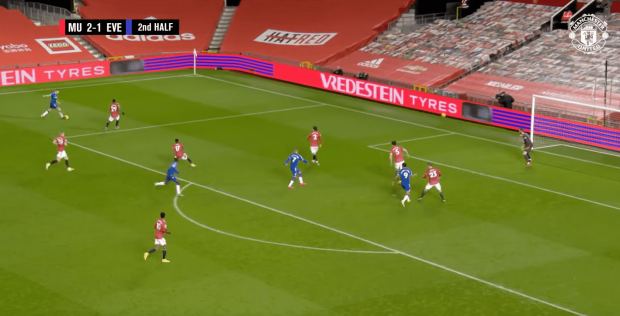 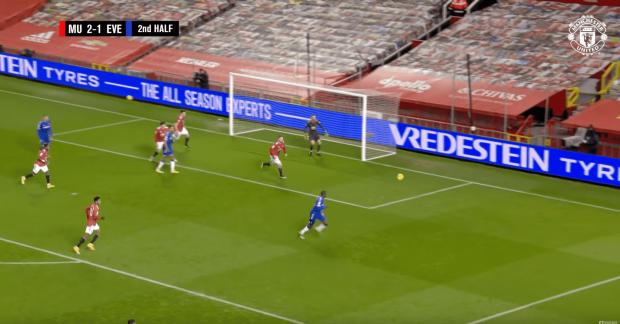 As for United’s third, it was once again Maguire that played three Everton players onside, quite inexplicably failing to keep to the line he, himself, should have been in charge of.

Both full-backs, perhaps Aaron Wan Bissaka especially, have tended to get caught too centrally when the ball breaks to a winger this season but it could be argued that part of the reason is that they are simply covering unmarked players in the box.

Maguire is slow, that on its own is not necessarily catastrophic, but it is his positional sense that is the biggest problem. United play a zonal marking system, yet Harry is constantly in the wrong area. Whenever United are attacked down their right, he goes to the near post and leaves a gap at the far post. When attacked down the left, he pulls out too far and leaves a gaping hole between himself and Lindelof.

What’s done is done, and United have spent £80 million on this man. In fairness, he did look a much better player for Leicester and England when we bought him. But now you kind of feel like someone looking at their partner after 18 months and wondering what the hell you saw in them and why you hitched your wagon to them.

There is a psychological attachment to something you have spent a lot of money on. If you have two suits, one you bought for a grand and the other you got from a charity shop, you are always going to think you look better in the first one. No matter how many people compliment how you look in the charity shop suit, you want to look your best in the expensive one. United – Solskjaer and the board – have to forget how much they paid for each player and select players based on their merits.

Right now, the trouble is that there is little alternative within the ranks at Old Trafford. Eric Bailly is our best defender, but cannot stay fit for more than two or three games at a time. Axel Tuanzebe has promise, but has looked shaky in his last couple of outings. Marcos Rojo has gone and Phil Jones is not yet fit and even if he was, well, he’s Phil Jones. Although right now, you almost find yourself longing for a return to the Smalling/Jones era. This is hardly an upgrade, let’s face it.

So we will have to muddle on through with this until the end of the season. Solskjaer seems unlikely to drop Maguire no matter how badly he plays and others will be thrown in front of the bus. But it will no doubt cost United the Premier League title, it has already cost them their place in the Champions League knockout stages and it could well cost them any chance of silverware in the remaining cup competitions.

Perhaps this is ‘toxic’ and negative but as someone who has been a United fan since 1975 (and season ticket holder for most of those 46 years) I am going to plead ‘not guilty’ to plastic and disloyal. I am certainly not blaming Maguire for every defensive error that United make, I am not even saying he should be sold, I simply don’t believe he is good enough to be the leader of United’s defence or the captain of the team.