Paul Pogba is out and Eric Bailly is doubtful for Manchester United’s FA Cup fifth round tie with West Ham at Old Trafford tomorrow, with the former confirmed to be out for some weeks following a scan today on the quadriceps injury he sustained against Everton at the weekend.

Ole Gunnar Solskjaer says Bailly is ‘closer’ than Pogba to being fit and that he hadn’t decided whether to rest Harry Maguire for the game. The former may determine the latter but we think the Maguire-Lindelof partnership will remain intact if there is any doubt about Bailly’s fitness.

The only other centre-back option available should Solskjaer wish to rotate is Axel Tuanzebe, but he blotted his copybook by needlessly conceding a free kick in the dying seconds against Everton that led to their equaliser. This may deter the boss from starting him tomorrow.

David de Gea is another matter. He made two errors in the same game and would almost certainly have been rotated with Dean Henderson in any case, so it seems inevitable that Deano will get another run out.

Luke Shaw has been one of United’s key men recently so he could be put in cotton wool for the weekend, with Alex Telles being given another chance to stake his claim at left back. Aaron Wan-Bissaka could also be rotated but with five days to recover and not such an obvious understudy on the right, he is more likely to keep his place.

With Pogba injured, United will probably start with the midfield pair that finished the game against Everton, Scott McTominay and Fred, although Nemanja Matic is an option.

Edinson Cavani could be rested and Anthony Martial restored at centre forward. Donny van de Beek may also be given a game, with one of Rashford, Fernandes or Greenwood rested. As Solskjaer is usually loath to drop either his positional number 10 or his actual number 10, our money is on Greenwood giving way, although this would mean the Dutchman occupying that uncustomary left wing role again and Rashford switching to the right.

One interesting possibility is that we will see teenage sensation Amad Diallo on the bench. The Ivorian has been on fire in his first two starts for the Under 23s and an FA Cup game against tired legs could be the perfect opportunity to blood him in the first team. With five subs allowed and extra time a possibility, there is a good chance we will get our first glimpse of the young prodigy. 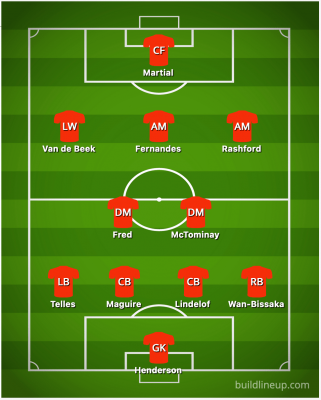