Predicted XI vs West Brom: Anthony Martial to miss out

With Paul Pogba definitely out and Eric Bailly back fit, Ole Gunnar Solskjaer has one or two dilemmas when selecting his Manchester United starting XI for tomorrow’s game against West Brom at the Hawthorns.

The first issue is in goal. David de Gea made two mistakes in the 3-3 draw with Everton last weekend, while understudy Dean Henderson played well and kept a clean sheet against West Ham in midweek. Many observers are suggesting that this is the time for the boss to give Henderson a run in the side, but he has proven already that he is loyal – sometimes to a fault – and we think De Gea will start for that reason alone.

There are similar issues in central defence. Victor Lindelof and, in particular, Harry Maguire also had a bad day at the office last week and one or the other may have been rested on Tuesday had Bailly been fit. However, they redeemed themselves with a clean sheet and so, again, we think rightly or wrongly, it will be business as usual across the back line.

Tuesday’s hero off the bench Scott McTominay is likely to return to the starting lineup alongside Fred and Edinson Cavani and Bruno Fernandes, having been rotated midweek, will almost certainly be recalled. That leaves two spaces to fill, with Marcus Rashford, Anthony Martial and Mason Greenwood the candidates. Solskjaer seems to have preferred Greenwood to Martial lately and almost always plays Rashford, so the Frenchman is the most likely to give way.

The long expected wait for Amad Diallo’s debut will probably not end tomorrow. He was not selected for yesterday’s Under 23’s match due to illness, so unless he recovers quickly he is set to miss out again. Thursday’s Europa League clash with Real Sociedad could be the day. 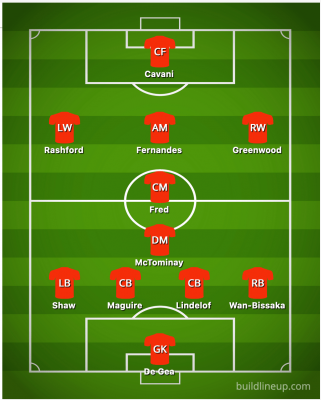