Manchester United dropped two points against relegation battlers West Brom yesterday but what is more concerning is not the result but the fact that, if anything, it was the Baggies who had the best chances to win the game.

As reported here yesterday, the Red Devils managed an expected goals figure of just 0.48, the worst of any team against West Brom for four years and United’s second worst against any side this season.

Expected goals is a measure of the quality and frequency of chances created and it was certainly that lack of cutting edge to United’s play that was the problem and in bafflingly stark contrast to that of just 12 days prior, when they put nine goals past Southampton.

One of the most bizarre statistics to come out of yesterday’s game is that centre-back Harry Maguire had the second most touches of any United player in the West Brom box – six. Only Marcus Rashford had more (seven). Bruno Fernandes had just two, one of which was his golazo.

‘Manchester United’s plans have gone awry if he is on the ball more often than Bruno Fernandes in that rather important part of the pitch,’ says The Athletic’s Laurie Whitwell, and few would argue.

Maguire’s activity map looks more like one of a left wing back than a centre-back and he had more touches in the game as a whole than any other United player – 110. 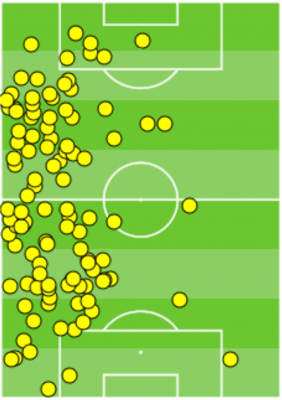 ‘Maguire does possess good passing range, but the impetus for unlocking a tight unit should fall to more offensively gifted players. His involvement at that end of the pitch — setting aside his curious engagement with Mbaye Diagne further back, which required a bailout from David de Gea — spoke to a paucity of individual invention and team cohesion,’ Whitwell adds.

United looked massively improved when Mason Greenwood was introduced on the right wing after 66 minutes and this match provided more evidence – which should not have been needed – that Marcus Rashford on that right flank simply does not work. Until that 66th minute, virtually all United’s attacks came from the left. It was predictable, blunt and toothless.

More questions must also be asked about team selection and the timing of substitutions. It is debatable as to whether Solskjaer needed to start with two defensive midfielders in a game against a team that would inevitably play a low block. But after conceding an early goal, it was absolutely obvious that one of McFred should be substituted for a more creative player, yet this did not happen until the 79th minute, when Donny van de Beek was finally introduced.

That lack of midfield creativity, coupled with the ineffectiveness of Rashford on the right and the abysmal form of Anthony Martial, led to Maguire’s persistent forays upfield in an attempt to generate some impetus. However, as Whitwell neatly sums up, ‘the line between injecting urgency and looking desperate was blurred.’