Ole Gunnar Solskjaer has a number of injury concerns ahead of Manchester United’s Europa League tie with Real Sociedad tomorrow evening and has already admitted that there are others who may need to be rested.

Paul Pogba (thigh), Donny van de Beek (muscle) and Edinson Cavani (muscle) are all definitely out and are not travelling to Turin.

Anthony Martial and Scott McTominay are doubtful, leaving the manager with a number of difficult decisions to make.

With the Premier League his priority and a second leg next week at Old Trafford, will he gamble with some fringe players and youngsters, such as Juan Mata (who he mentioned at the presser), Axel Tuanzebe, Dan James, Amad Diallo and Shola Shoretire? Or will he take a more conservative approach, replacing only those who aren’t fit to play?

It is possible that a change in formation could allow him to do a little of both. Luke Shaw and Aaron Wan-Bissaka could be rotated with Alex Telles and Brandon Williams, but the incoming stars’ strengths lie mostly in attack, so shifting to a back three would give them more licence to get forward and do what they do best.

With the full-backs providing the width, Marcus Rashford and Mason Greenwood can push inside to provide a twin strike force and cover for the absent Cavani and (potentially) Martial.

If McTominay doesn’t make it, there is a natural replacement in Nemanja Matic and in goal, Dean Henderson is normally given the nod in cup games.

The only other question mark would then be who would make up the back three. Victor Lindelof’s ongoing back problems could see him also rested, allowing Eric Bailly and Axel Tuanzebe to come in alongside Harry Maguire.

With twelve allowed on the bench, tomorrow could finally see the much-anticipated debut of Amad Diallo and/or even that of 17-year-old Shola Shoretire, who is also included in the squad. 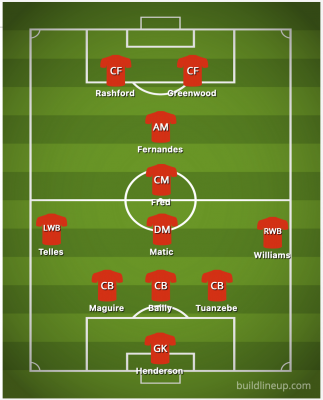