Manchester United will finish second in the Premier League this season, 14 points behind champions Manchester City, according to the CIES Football Observatory.

The French organisation uses statistical data based on ‘shots on target and from the box attempted or conceded, ball possession, as well as teams’ own passes and those of opponents in the opposite third of the pitch’ to predict the number of points each team will amass in each of Europe’s major leagues.

The model predicts that United will finish the season on 72 points to clinch a coveted Champions League spot.

Liverpool will finish third on 69 points and Chelsea fourth on 68, with Leicester City narrowly missing out on the top four with 66.

At this stage of the season most United fans would probably settle for second and most would agree with the statisticians that neighbours City are shaping up to be runaway winners of the league. However, there is no reason why Solskjaer’s men shouldn’t be capable of putting a run together and proving them wrong.

In other leagues, Inter Milan are predicted to win Serie A, Atletico Madrid to win La Liga and Brentford are set to pip Norwich for first in the Championship on goal difference. 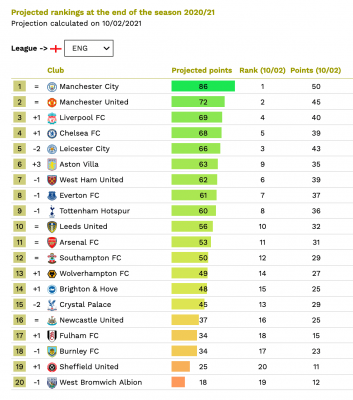