Hannibal Mejbri needs more protection from referees if he is going to avoid serious injury at a young age, according to Manchester United Under 23’s manager Neil Wood.

The 18-year-old, signed from Monaco in 2019 for a fee of €10 million (£8.7m), is one of the Red Devils’ brightest prospect and was called up to the senior squad alongside 17-year-old Shola Shoretire last week, but he has been able to join up due to another injury.

The ankle injury sustained in the recent Premier League 2 game against Arsenal is the latest in a string of leg, foot and back injuries that have seen his contribution and development limited. He has scored three goals and registered five assists so far this season in the Academy despite the injuries, but Wood is concerned that things will go from bad to worse injury-wise if something is not done. 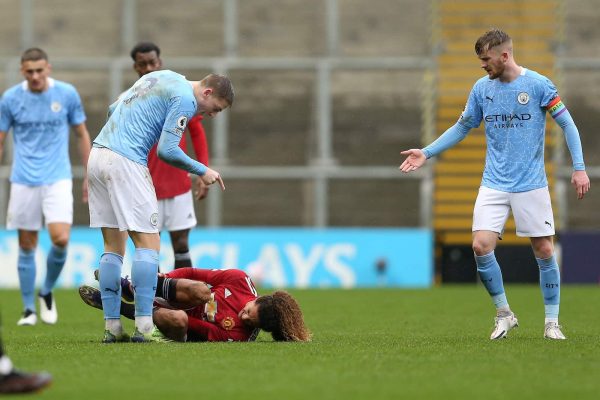 Man City U23 defenders protest their innocence after fouling Hannibal

‘The frustrating point for Hannibal is that there must be about 15 fouls on him per game and at some point if it’s not stopped, or if the referee is not protecting him, he’s going to get his leg broken. That’s what I fear for him,’ Wood said in The Mirror.

There is no news from Old Trafford as to when the French starlet will be fit enough to resume training. United have the luxury of a 4-0 aggregate lead to carry forward to the second leg of the Europa League Round of 32 tie with Real Sociedad at Old Trafford on Thursday, which could be the perfect opportunity for him to make his first team debut if fit.