Ole Gunnar Solskjaer could be set to make a big decision tomorrow as he contemplates changing his first choice defence.

Asked at yesterday’s press conference whether goalkeeper Dean Henderson has a chance of retaining his place in the side after completing his sixth clean sheet of the season, the manager replied ‘Of course Dean is in with a shout… but I have a very, very good goalkeeper in David [De Gea]… so I can’t say to you now.’

The temptation must also be to retain Eric Bailly in the starting lineup after the excellent clean sheet in Turin and it seems clear that despite Solskjaer’s loyalty to David de Gea and Victor Lindelof, the Henderson – Bailly- Maguire combination in the heart of defence looks much stronger. The fact that the boss is mincing his words suggests he has seen that too and is ready to take the plunge.

Elsewhere in defence, Luke Shaw will almost certainly be recalled despite Alex Telles’ great showing on Thursday and Aaron Wan-Bissaka is an automatic choice at right back.

The boss also said at the pre-match press conference that he is waiting to see whether Scott McTominay, Donny van de Beek and Edinson Cavani will recover from their knocks and indicated that he was fairly confident they would. Van de Beek is unlikely to start anyway, unless McTominay doesn’t make it, but Cavani would probably walk back into the side with Mason Greenwood pushing back out onto the right wing.

It goes without saying that Bruno Fernandes and Marcus Rashford will start the game and there is no reason to suspect that Fred will not continue in midfield, especially with the ongoing absence of Paul Pogba.

With all that in mind, here is our predicted line-up for tomorrow’s game at Old Trafford: 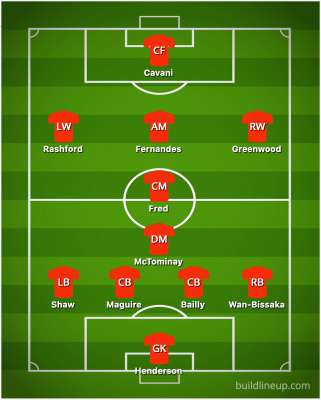