With a 4-0 lead, the tie all but won and a tough away tie against Chelsea at Stamford Bridge on Sunday, it would be a huge surprise if Ole Gunnar Solskjaer does not rotate his Manchester United side against Real Sociedad at Old Trafford tomorrow.

After the Newcastle match Solskjaer said Amad Diallo and Shola Shoretire would be in the squad but would not start the game, but at today’s presser he hedged his bets, saying ‘they’ll be involved, they’re in the squad, but I’m not going to tell you whether they’re starting or not.’

He also confirmed that Edinson Cavani and Donny van de Beek are still out injured and that the squad would be the same as for that Newcastle game, suggesting that Scott McTominay may also remain unavailable.

One player who will almost certainly start is the in-form Dan James, who attended today’s presser with the boss.

Mason Greenwood did not start against Newcastle so should be fresh and we think that Anthony Martial will be given another chance to find his form.

It’s possible that elsewhere, the manager will adopt a positive approach and rest his entire starting XI. This would leave United short of midfielders, unless someone like Juan Mata is asked to play alongside Nemanja Matic so that Fred can be rested.

Another possible midfield option is Axel Tuanzebe, who can play as a DM, although we have him partnering Eric Bailly in our predicted side. However, the boss rarely rotates Harry Maguire, so another option could be for him to play alongside Bailly and for Tuanzebe to fill that midfield berth.

Alex Telles is almost certain to come in for Luke Shaw at left back and Brandon Williams is champing at the bit for another run at right back, with Aaron Wan-Bissaka getting a well-earned rest.

This leaves just one place up for grabs for either Shoretire or Amad. If Shoretire is selected, he is likely to play in the hole with Greenwood pushed out wide right. If Amad starts, Greenwood would play as a number 10 (or number 9 with Martial at number 10).

It would certainly be an adventurous line-up but, hey, we’re 4-0 up and resting players has to be the priority right now.

So here, then, is our predicted line-up: 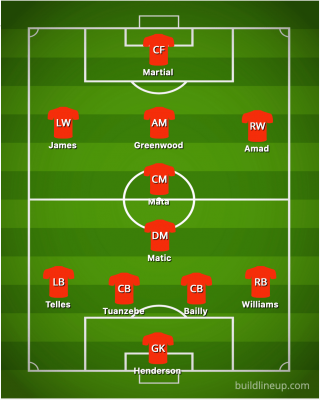